Echo tops is a radar product offered by weatherTAP that gives you some valuable information on a storm's vertical development. Always keep in mind that echo tops do not tell you how tall a t-storm is. Many people have that misconception.

Echo tops tell you the top of an area of precipitation, as detected by radar. It is the highest level of a storm that the radar detects "bounce-back" energy of at least 16 dbz. Radar measures energy in dbz units. That's the measure of the amount of energy that returns to the radar after it is bounced back, whether from hitting a rain droplet, hail stone, snowflake, etc. Light rain returns a signal of about 16 dbz. The radar really cannot detect anything less than that. So, radar will tell us that the highest cloud top is, say, 35,000 feet because at 35,000 feet it detected a "16-dbz's" worth of precipitation. However, the cloud will go even higher than that because the radar can't detect the mist that makes up the cloud (clouds would return a dbz much lower than 16 dbz).

We can get a lot of information from echo tops by knowing the highest altitude that radar estimates precipitation to be. Generally, the higher the echo tops, the stronger the storm. This is due to the fact that stronger updrafts should lead to precipitation being hoisted higher into the atmosphere. We'll talk more about dbz a bit later on, especially when we get to RadarLab HD+ material.

Below is an example of how I have used the echo top product this morning. I'm focused on that line of storms approaching the Mississippi River. Notice how the echo tops correspond to some of the heaviest rainfall? We can use the echo tops product and feel confident that cloud tops are exceeding 40,000 feet, giving us an indication that these storms are strong enough to produce very heavy rainfall, strong winds, and dangerous lightning. It's always helpful to be able to utilize more than one product to determine a storm's strength. That helps cut down on false-alarm warnings. Basically, the radar product shows us what kind of precipitation we can expect near the surface, while the echo tops product shows how high up the radar detects precipitation. 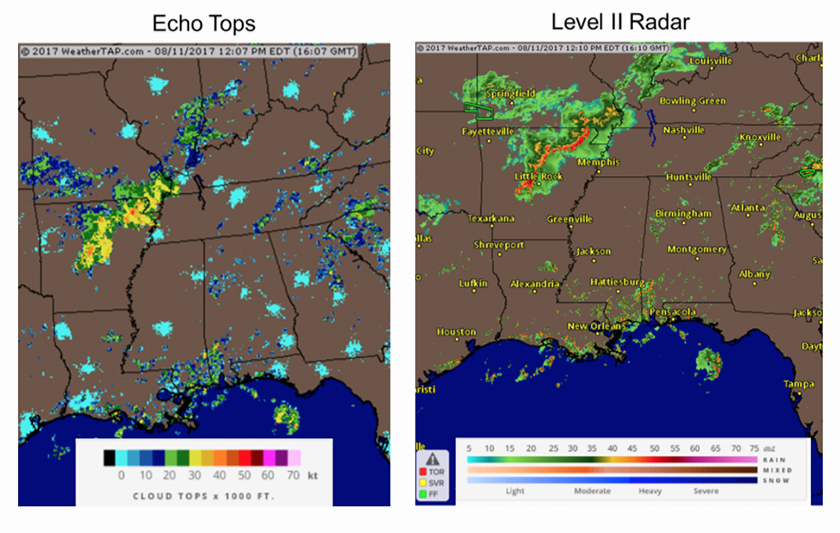 Wednesday, the deadly remnants of former tropical depression Fred caused significant damage to the south with Haywood County of North Carolina bearing the brunt of the storm's destruction.