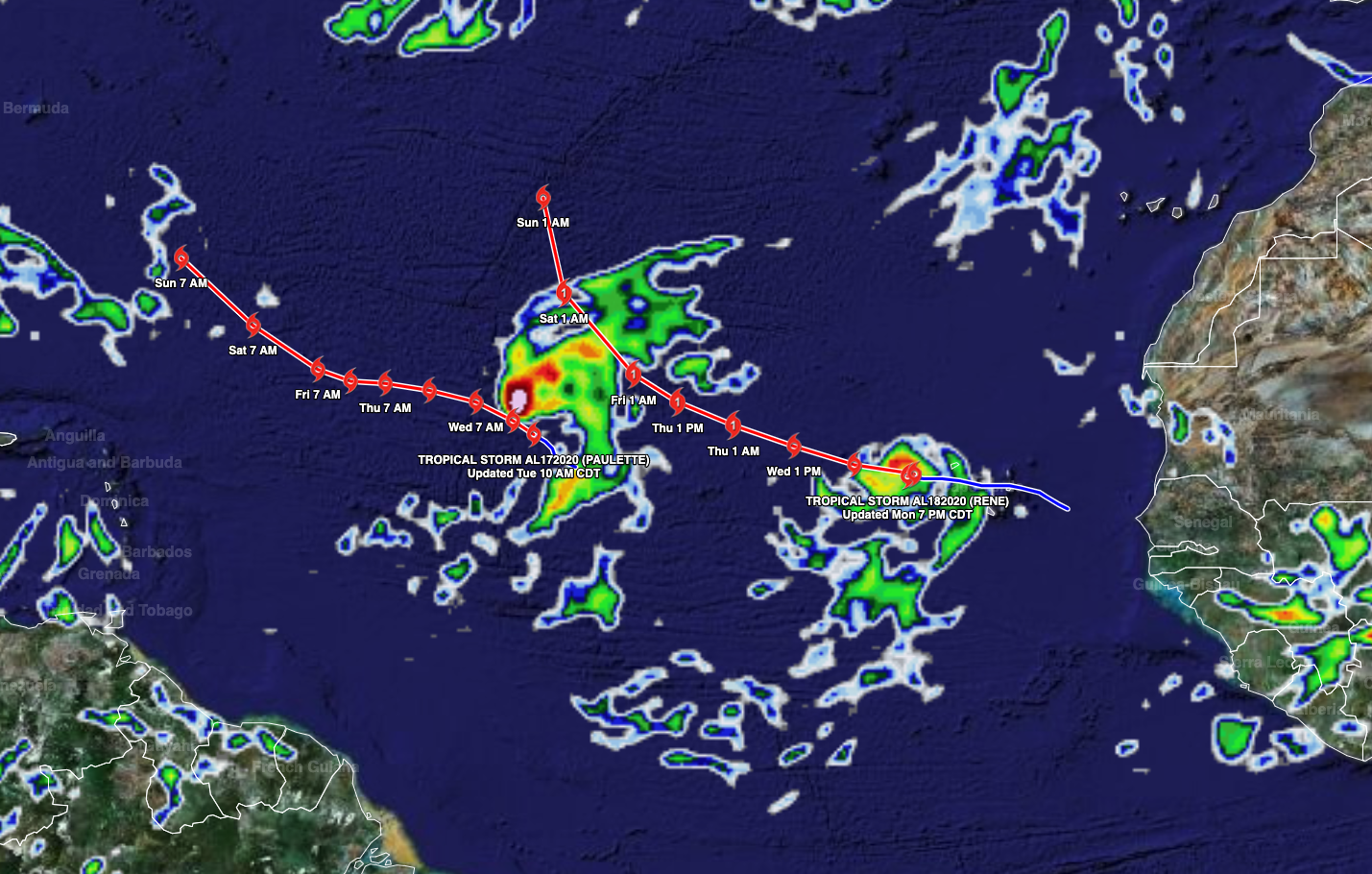 Two Tropical Storms, Paulette and Rene are tracking through the Atlantic and there are two additional areas in the Atlantic also being watched for the possible formation of a tropical depression this week. 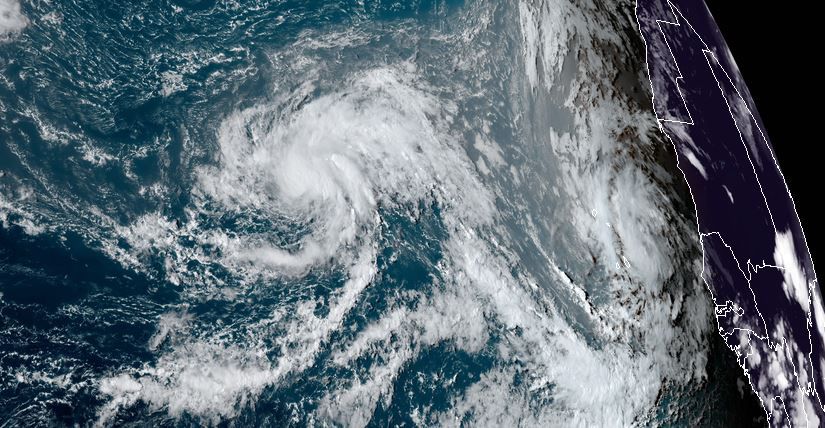 Tropical storms Paulette and Rene make their way westward through the Atlantic this week. Both storms set records for the earliest “P” and “R” storms in any Atlantic hurricane season.

As of Tuesday afternoon, Paulette continues to strengthen, however, the storm has some obstacles in the way of its development. Currently, the storm is battling vertical wind shear, which tilts a tropical storm’s cyclone’s core and can push the storm away from its center. As the storm continues its trek westward, Paulette must make its way through some dry air that will slow the storm's path by strengthening thunderstorm downdrafts preventing thunderstorms from persisting near the center.

﻿Paulette brings no threats to the United States coast at this time and may not see landfall. Those in the Leeward islands should continue to monitor the storm for any changes.

Rene will soon move west past the Cabo Verde Islands and head towards the general area where Paulette is currently.

Rene may strengthen into a hurricane, but its development could be blocked by the same conditions that are likely to affect Paulette. Because the storm is trailing closely behind Paulette the storm must also track over the cooler water left behind from Paulette, as well as further disrupting the storm's growth. Beyond the Cabo Verde Islands, Rene brings no further threats to the United States coast at this time.

Right now, there are two other areas in the Atlantic that the National Hurricane Center is monitoring for tropical development. These two areas are labeled in the map below, in addition to Paulette and Rene. 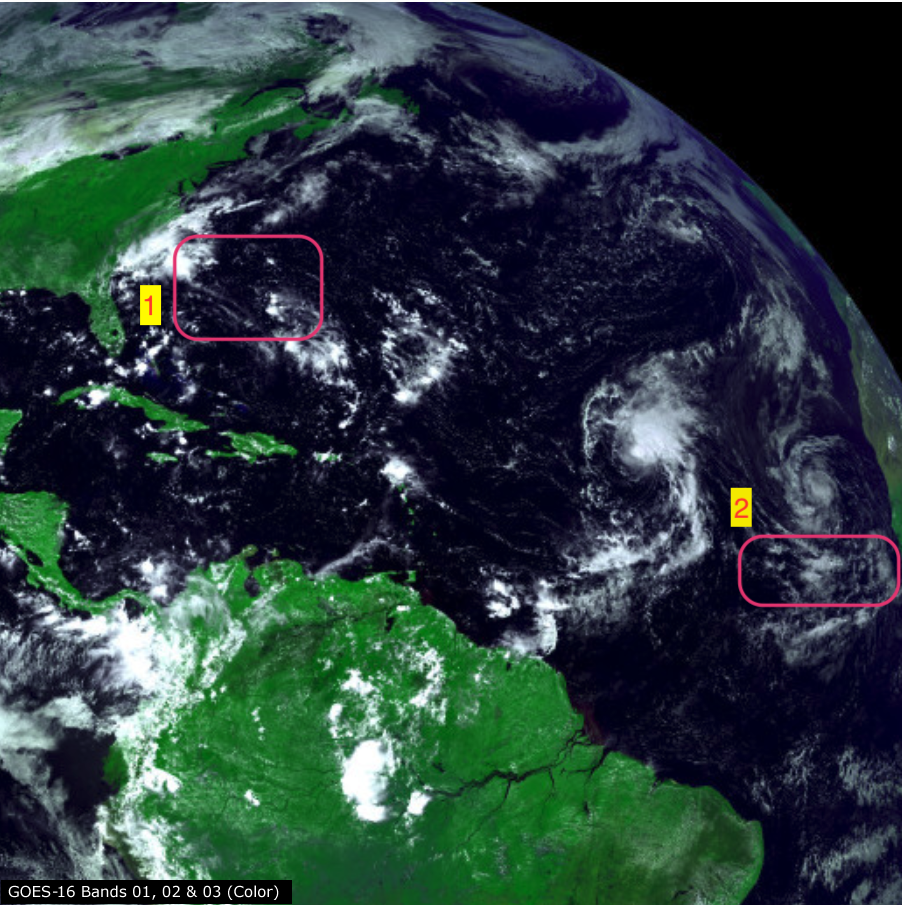 The first area is a low-pressure system located several hundred miles east of North Carolina. Although this system is disorganized, gradually growing into a tropical depression is possible through the next few days as it moves generally west to west-northwest. This system could bring rainfall in parts of the mid-Atlantic and Southeast by later this week even if it becomes better organized.

A second storm system currently located over Africa right now will migrate into the east Atlantic by Thursday. The system is likely to form into a tropical depression as it makes its way westward later this week into next weekend. At this time, it is too early to tell if this storm could make landfall.

The 2005 hurricane season previously held the record earliest "P" and "R" storms, Philippe on Sept. 17 and Rita on Sept. 18, respectively. After Rene, only four names are left in the 2020 Atlantic hurricane season names list. Additional storms after "Wilfred" would be named after letters in the Greek alphabet starting with "Alpha". That has happened only once before, in the 2005 hurricane season. Monitor the storms with us at weatherTAP.com! Start your free trial today. No credit card information required at sign-up.

A widespread, long-lasting, and historic heat wave will continue for a few more days for the U.S. Pacific Northwest region. Many places throughout the area will experience all-time record heat due to a massive, nearly stationary ridge of high pressure centered over far Southwest Canada.

The city of Nashville is recovering from a deadly flood caused by heavy rains that prompted hundreds of rescues and killed at least four people. Emergency crews conducted hundreds of water rescues as people were trapped in the homes and their vehicles during extreme flooding in Middle Tennessee.