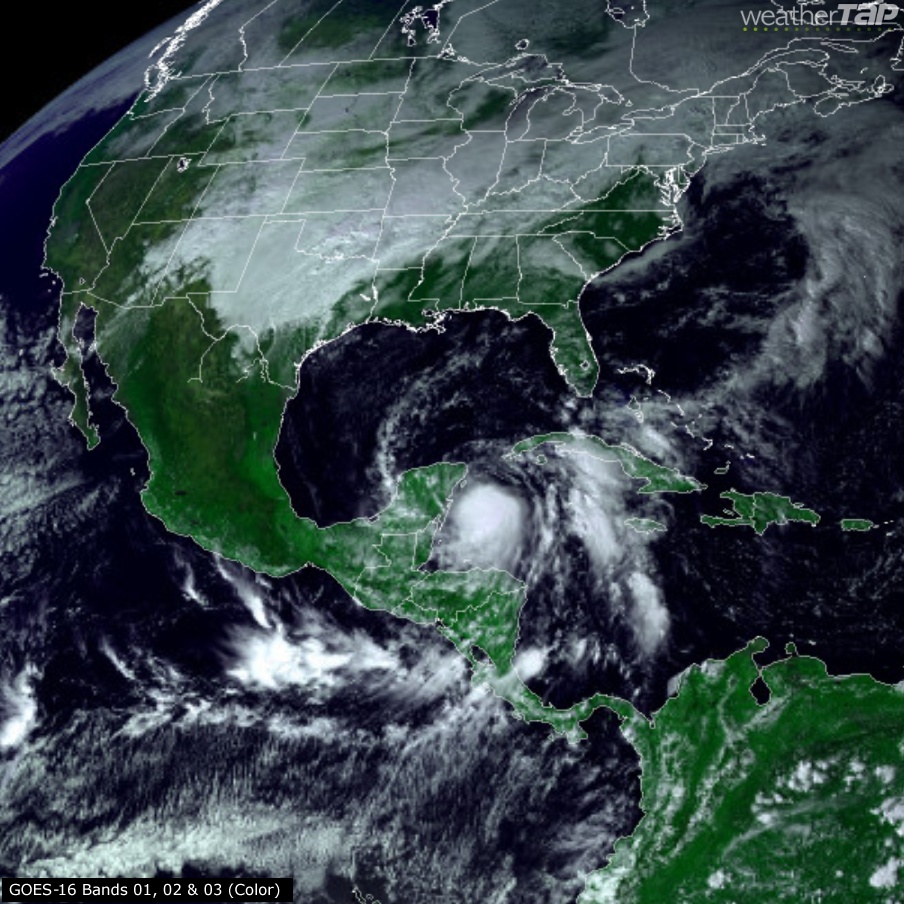 Last night, Tropical Storm Zeta intensified and is expected to develop into a hurricane as it draws nearer to Mexico’s Yucatán Peninsula. Currently, Zeta is moving northwest at 10 mph, and is set to pass over the northern Yucatán Peninsula late Monday and Monday night. Hurricane warnings are in effect between Tulum and Dzilam, as well as for Cozumel. The storm is likely to make landfall along the northern Gulf Coast around Louisiana and the Florida Panhandle on Wednesday. Right now, the biggest threats of Zeta are flooding rains, high winds and storm surge flooding. 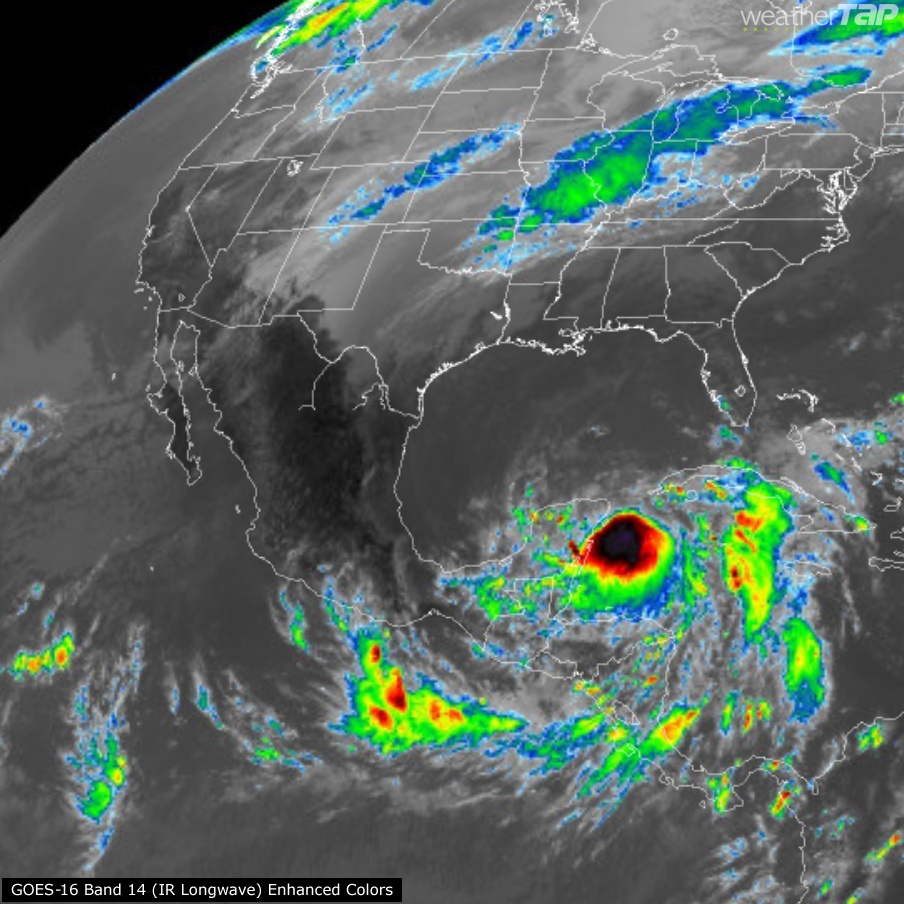 Zeta is likely to become the 11th named storm to make landfall in the United States this season. Only once before has the Greek alphabet been used for names, and that year was in 2005 where Zeta closed the hurricane season as the final storm. With another one to three storms possible before the end of hurricane season. It is likely that this year will break 2005′s record for the most storms in an Atlantic hurricane season. Zeta’s development is significant as its current path targets Louisiana, which has been hit by a host of weather disasters in 2020. Some parts of the State have spent a cumulative total of three weeks or more in National Hurricane Center forecast cones in 2020, with Category 4 Hurricane Laura in August and Hurricane Delta in October. Although Zeta’s landfall isn’t predicted to be overly intense, it’s another impact for a state that is struggling with multiple simultaneous recovery efforts amid a worsening coronavirus pandemic. 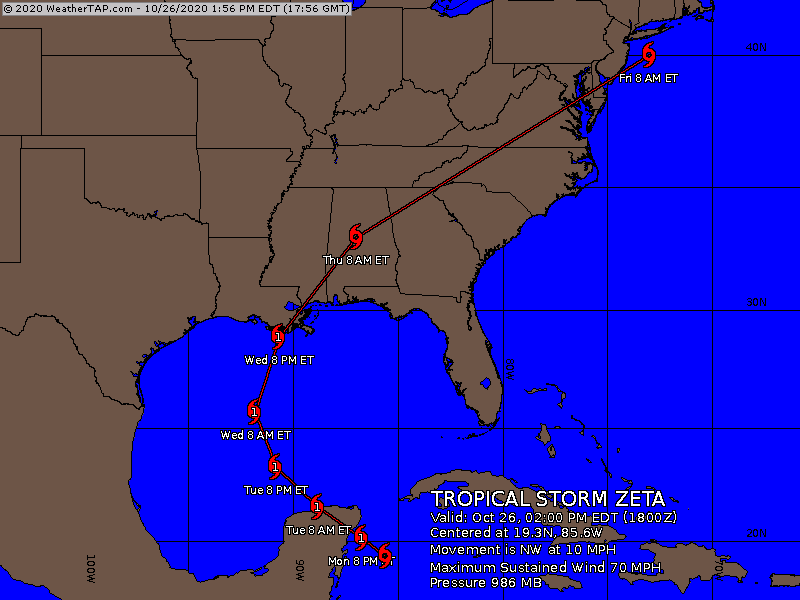 Tuesday, Zeta has the potential be a Category 1 after making landfall Monday. The hurricane will weaken some before reemerging over the Gulf of Mexico. The storm is currently at a state where predictions are too soon for a provide answer on how well the storm will be able to reorganize. What forecasters are saying is the most likely scenario is that the storm will slowly weaken as it approaches the Louisiana coast as a high-end tropical storm or Category 1 hurricane. Minimal ocean heat content, or the energy that warm ocean waters can contribute to the maintenance or intensification of tropical systems, is present. While Sea Surface temperatures are milder than average for this time of year due to recent cold fronts. In the upper atmosphere, high pressure and broad clockwise flow over the Gulf of Mexico will help with Zeta’s outflow which could help it maintain strength longer than normal over otherwise less-than-ideal sea surface temperatures. Mid-level winds may become more disruptive as the circulation approaches the coast Wednesday. 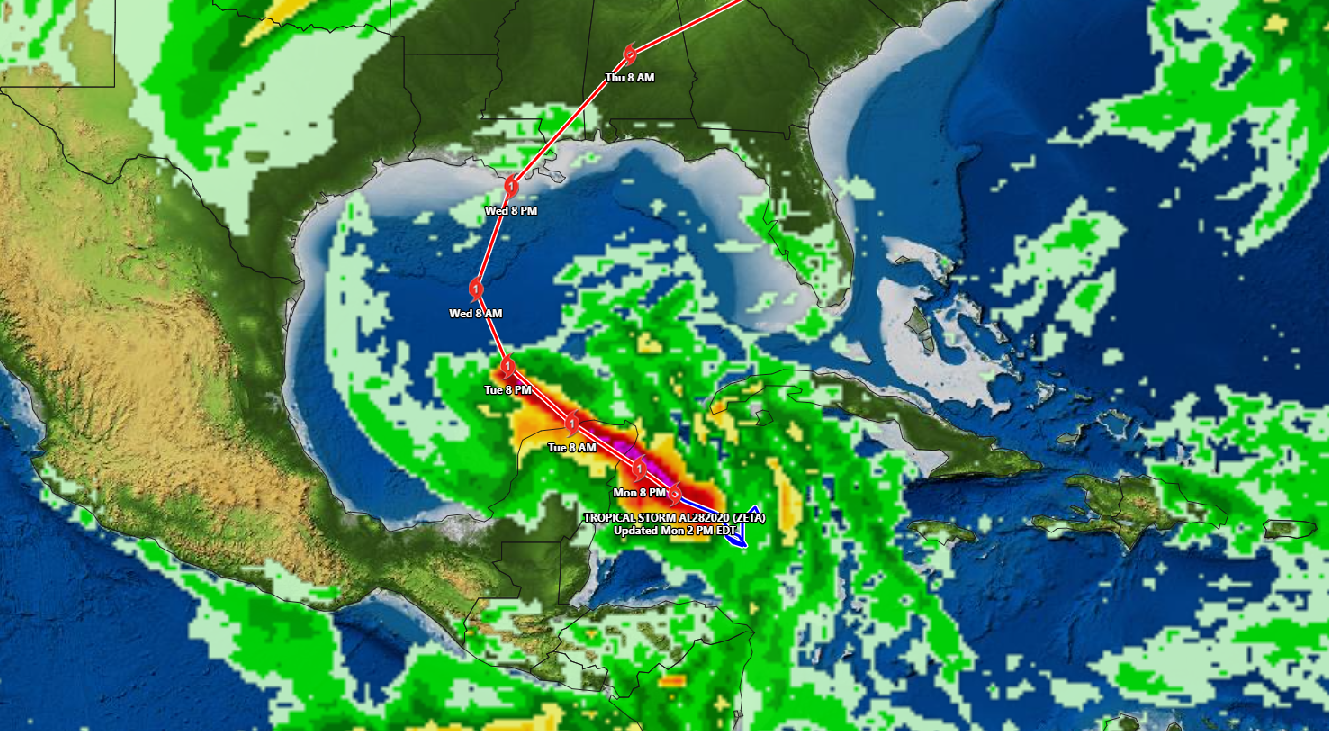 After the brunt of the storm’s high winds, coastal flooding and heavy rains occur during it's landfall on Wednesday, Zeta is projected to move northward ahead of an approaching storm from the west. In turn, Zeta will accelerate north and northeastward with its inclement weather arriving faster than hurricanes Laura and Delta. Strong wind gusts near the coast could potentially reach 70 mph, while storm surge flooding could affect a large area from where the storm makes landfall eastward into Mississippi, Alabama and Florida. Heavy rain is likely, with pockets of six inches or more likely from the greater New Orleans area into southern Mississippi and southwest Alabama.

The 2020 Hurricane center has been incredibly active. Monitor the storms with us at weatherTAP.com Start your free trial today. No credit card information required at sign-up.

Tropical Storm Peter has formed in the tropical Atlantic. It has reached an organized circulation that meets the standard along with top wind speeds that are estimated to have reached 40 mph.