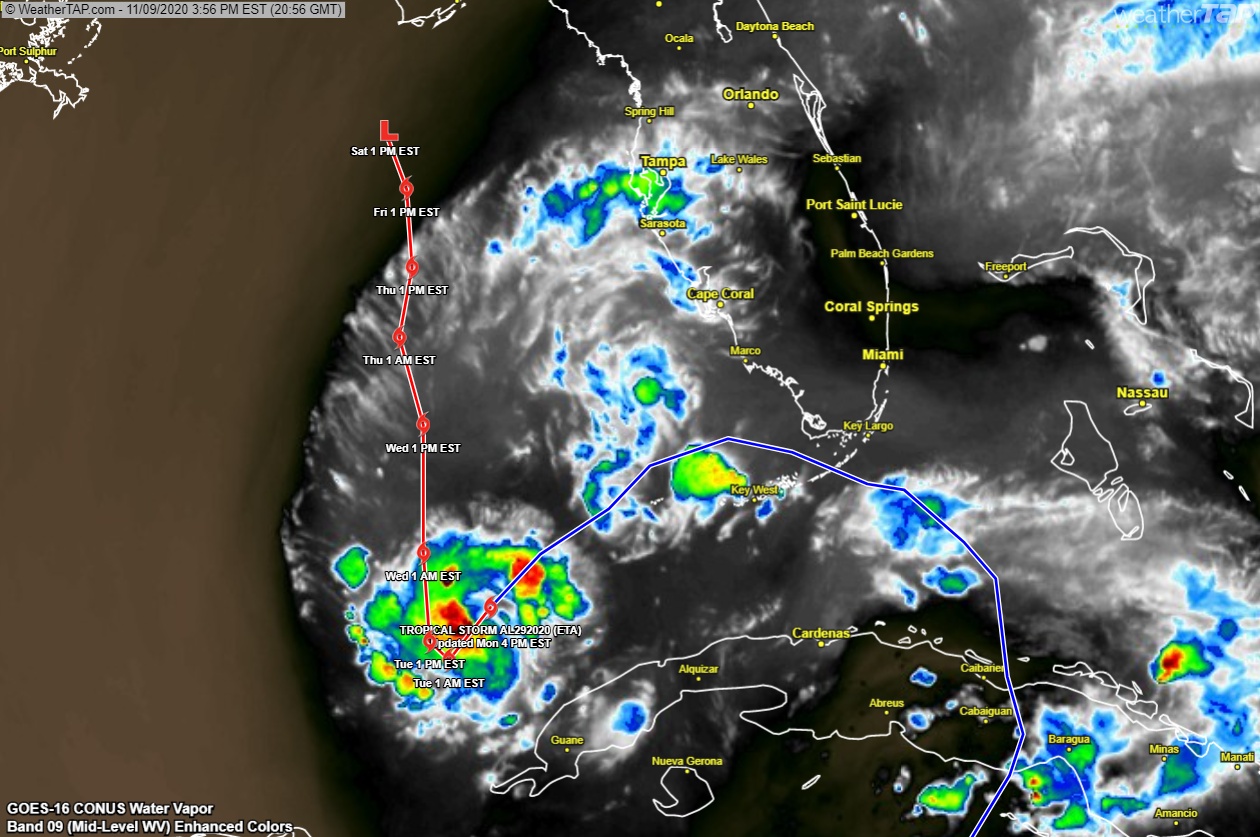 The Florida coast is once again bracing for Tropical Storm Eta after it struck the Florida Keys with life-threatening storm surge and flooding late Sunday. The storm made landfall in Lower Metacumbe Key last night with maximum sustained winds of 65 mph. Eta is expected to strengthen back into a hurricane by late tonight into early tomorrow as it moves into the Florida Bay. Currently, more than 23 million people in south Florida are under some type of hurricane or tropical storm advisory, with 21 counties under a state of emergency. Heavy rain and strong winds will likely stretch from Miami to Naples through Tuesday, and a storm surge of up to four feet is possible for parts of south Florida and the Florida Keys. 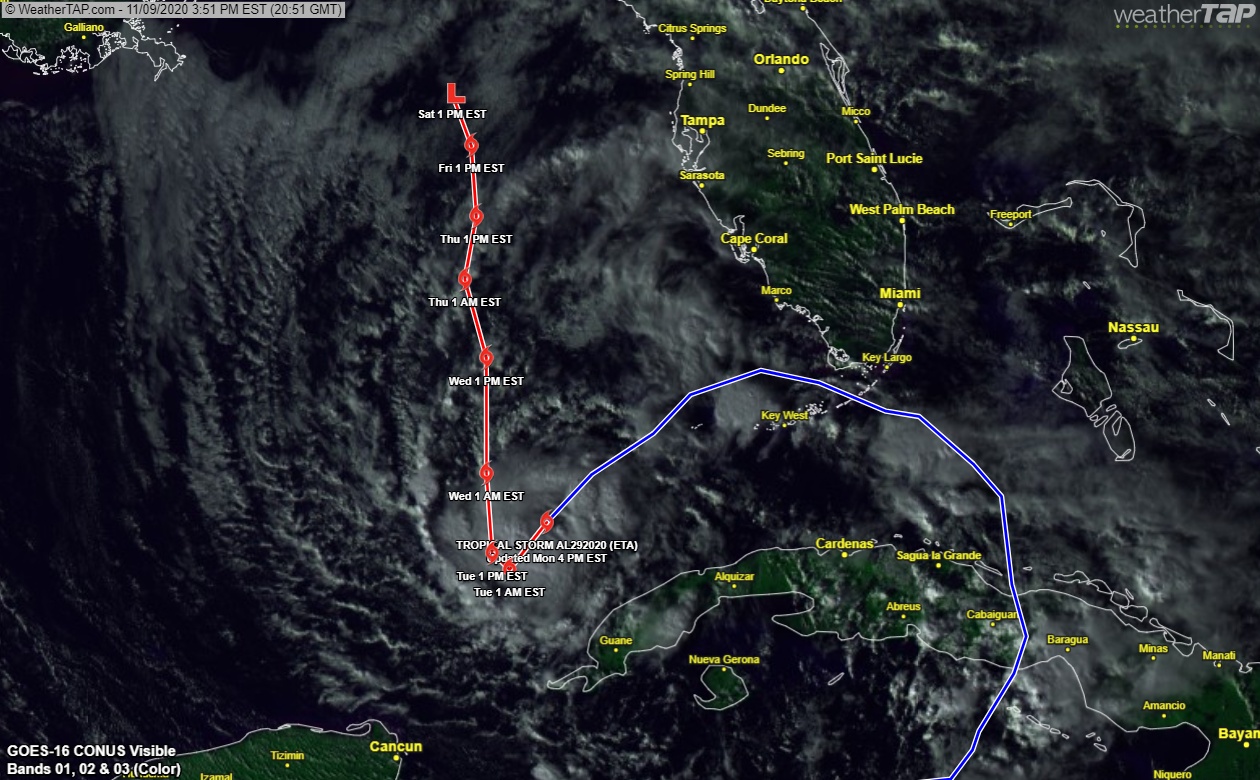 Eta is expected to later move into the Gulf of Mexico and may make a sharp turn and head back toward Florida later this week. Forecasters predict that the storm will continue to move west as conditions might become more conducive for the storm to further develop. Should the storm overcome the dry air near the core, Eta could reach Category 1 hurricane strength by sometime at midweek. With Eta quickly moving toward the southwest, conditions will improve significantly over South Florida into tonight and Tuesday. 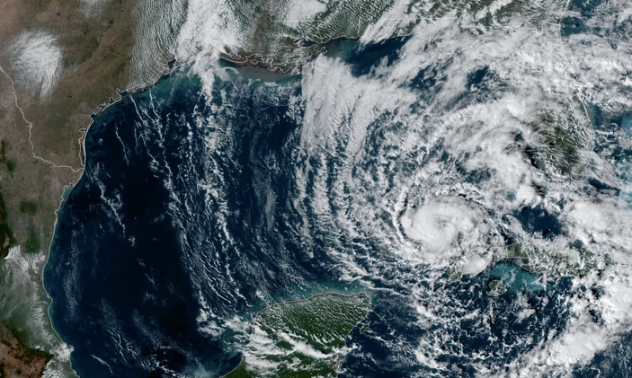 Ahead of the storm this morning, many schools in south Florida were closed and bridges were locked down in anticipation of high winds. Hurricane force wind gusts could remain through the night. Though the center of the storm remains off the coast, tropical-storm-force winds extend outward up to 310 miles, and a wind gust to 43 mph was reported in Homestead, Florida. 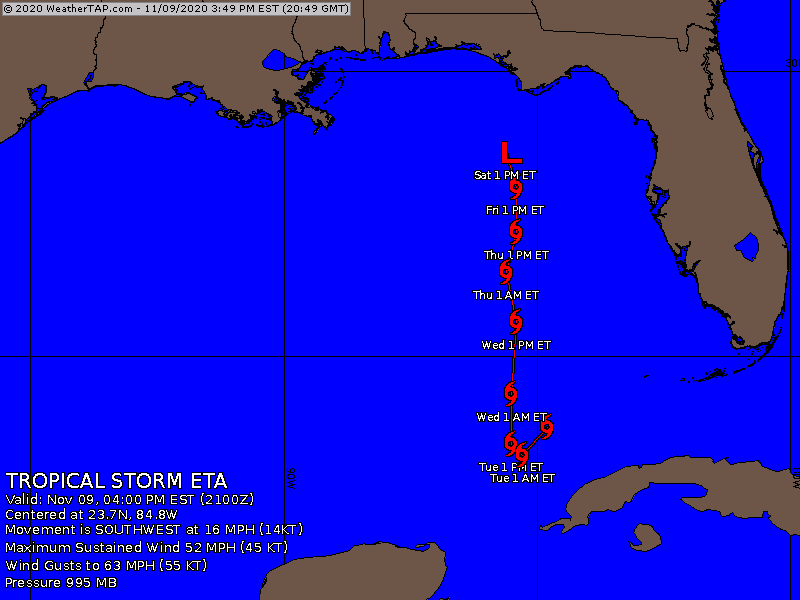 The Florida Keys and Peninsula have largely been able to dodge impact amid the record-setting 2020 Atlantic hurricane season, which has now seen 28 named systems. Tropical Storm Eta is the first tropical storm to make a November landfall in Florida since Tropical Storm Mitch in 1998. Eta is also the record-breaking 12th named tropical system to strike the continental United States this hurricane season.

﻿This hurricane season has been incredibly active this year. Stay ahead of the storms and start your free trial with weatherTAP.com today! No credit card information required.

A widespread, long-lasting, and historic heat wave will continue for a few more days for the U.S. Pacific Northwest region. Many places throughout the area will experience all-time record heat due to a massive, nearly stationary ridge of high pressure centered over far Southwest Canada.

Within the last 24 hours, Hurricane Ida’s remnants caused flash flooding that destroyed around 20 homes and washed several trailers away in western Virginia. More severe weather is predicted today, with heavy rains stretching into New England and tornadoes likely in parts of the Appalachians.