weatherTAP > Blog > The peak of Hurricane Season is almost here but it's still pretty quiet. What does it actually take for a storm to form and grow?

The peak of Hurricane Season is almost here but it's still pretty quiet. What does it actually take for a storm to form and grow?

The 2022 Atlantic Hurricane Season has been pretty quiet so far but we are only a month away from the peak on September 10th. We’ve only have three tropical storms form so far this year, Alex, Bonnie and Colin.

Alex formed near the Yucatan Peninsula with remnants of Hurricane Agatha from the Pacific basin. It then traveled east towards southern Florida and into Cuba bringing flooding rains to those areas.

Bonnie started as a tropical wave off the coast of Africa and then moved through the Caribbean and then made landfall with 50 mph winds along Costa Rica and Nicaragua border.

Colin formed offshore of Savannah, Georgia on July 1st and then moved inland across South Carolina the same day.

The tropics typically pick up in August with the formation zone all the way across the Atlantic.

We all forecast these storms each year but do we know some of the basics on how they form and how they stay so strong?

Hurricanes are the most violent storms on Earth. They form near the equator over warm ocean waters. The generic, scientific term for these storms is tropical cyclone. Other names they are given, are typhoons, cyclones, severe tropical cyclones, or severe cyclonic storms.

The second ingredient for a tropical cyclone is wind. As the wind passes over the ocean's surface, water evaporates and rises, then it cools and condenses back into large water droplets, forming large cumulonimbus clouds. 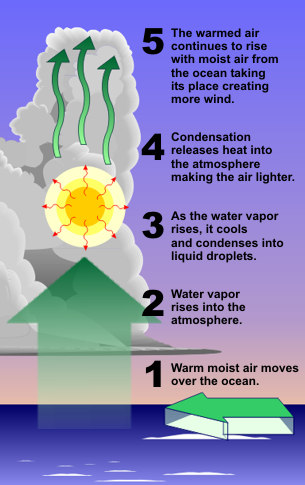 Warm water and lift alone are not enough for the formation of a tropical cyclone. There also needs to be a disturbance in the atmosphere such as a tropical wave, a TUTT Low (Tropical Upper Tropospheric Trough) or part of an old frontal boundary which usually develops close to the Gulf coast.

When the water vapor from the warm ocean condenses to form clouds, it releases its heat to the air. The warmed air rises and is pulled into the column of clouds. Evaporation and condensation continue, building the cloud columns higher and larger. A pattern develops, with the wind circulating around a center (like water going down a drain). As the moving column of air encounters more clouds, it becomes a cluster of thunderstorm clouds, called a tropical disturbance.

As the thunderstorm grows higher and larger, the air at the top of the cloud column is cooling and becoming unstable. As the heat energy is released from the cooling water vapor, the air at the top of the clouds becomes warmer, making the air pressure higher and causing winds to move outward away from the high pressure area. This movement and warming causes pressures at the surface to drop. Then air at the surface moves toward the lower pressure area, rises, and creates more thunderstorms. Winds in the storm cloud column spin faster and faster, whipping around in a circular motion. When the winds reach between 25 and 38 mph, the storm is called a tropical depression. 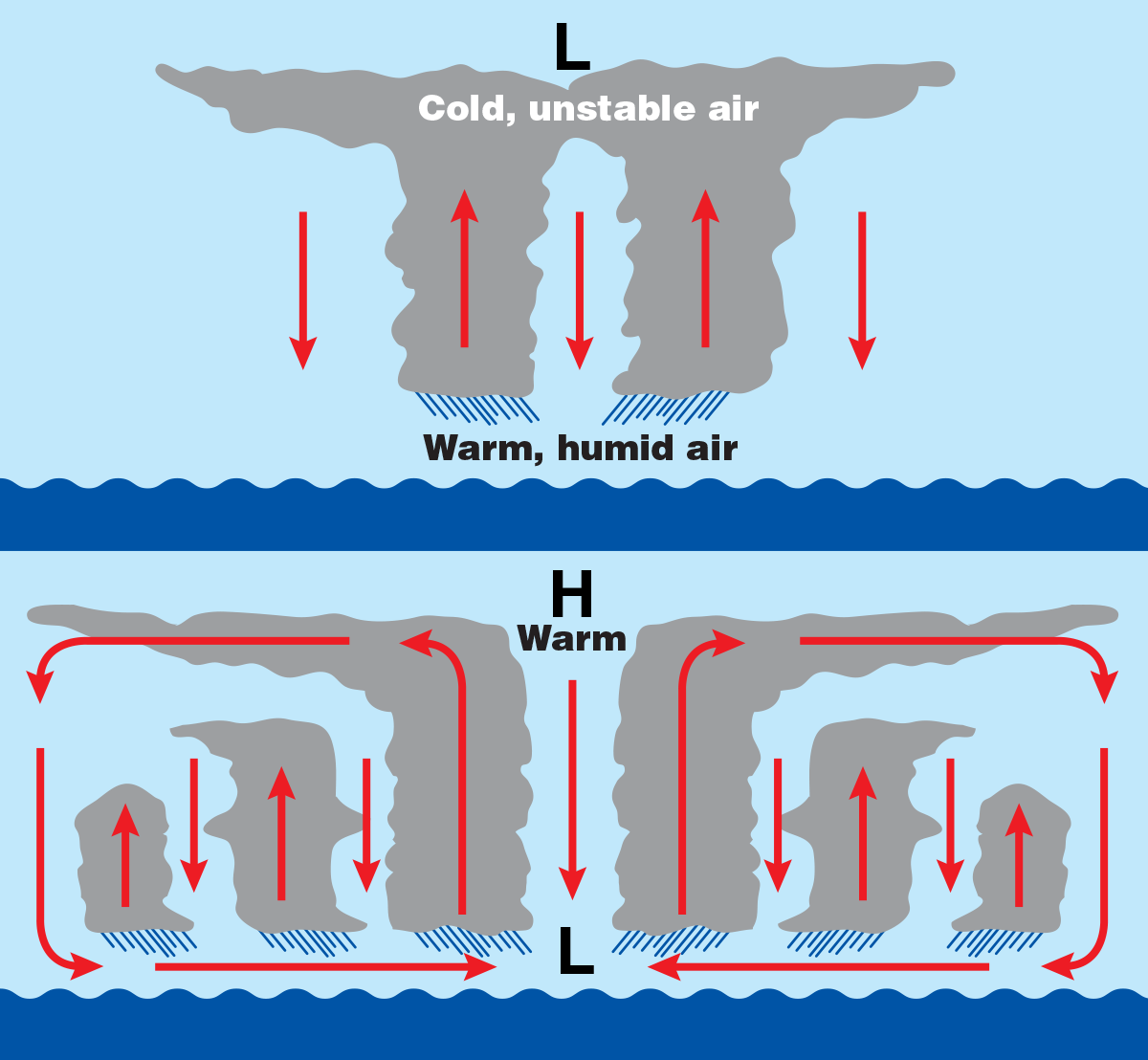 When the wind speeds reach 39 mph, the tropical depression becomes a tropical storm. This is also when the storm gets a name. The winds blow faster and begin twisting and turning around the eye, or calm center, of the storm. Wind direction is counterclockwise (west to east) in the northern hemisphere and clockwise (east to west) in the southern hemisphere. This phenomenon is known as the Coriolis Effect.

When the wind speeds reach 74 mph, the storm is officially a hurricane. The storm is at least 50,000 feet high and around 125 miles across. The eye is around 5 to 30 miles wide. The trade winds (which blow from east to west) push the hurricane toward the west—toward the Caribbean, the Gulf of Mexico, or the southeastern coast of the U.S. The winds and the low air pressure also cause a huge mound of ocean water to pile up near the eye of the hurricane, which can cause monster storm surges when all this water reaches land.

As we continue into the Atlantic Hurricane Season, WeatherTAP will be with you all the way. You can follow along with all the latest satellite images and data from the National Hurricane Center on our Tropical Page under the “Severe” tab.

This year’s monsoonal season brought record amounts of rain to Pakistan which created some of the worst flooding that country has seen in over a decade.

Everything You Need to Know About Weather Forecasts

If you click on Forecast, the very first option is U.S. Current Temperatures. Have you ever wondered where those temperatures come from?

Another Early Start to Hurricane Season This Year

Hurricane season is off to a quick start yet again with potential tropical storms brewing near the Bahamas and Florida.