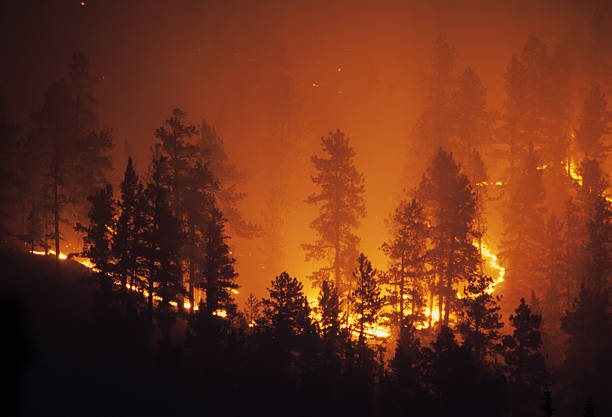 Firefighters in Oregon faced hot, dry and windy conditions late over the weekend, which fueled significant growth in what is now the country's largest wildfire. The Bootleg Fire in Klamath and Lake counties swelled to more than 300,000 acres as of Monday, an increase of around 17,000 acres from its status Saturday afternoon. As of Tuesday the fires are at only 30% containment. 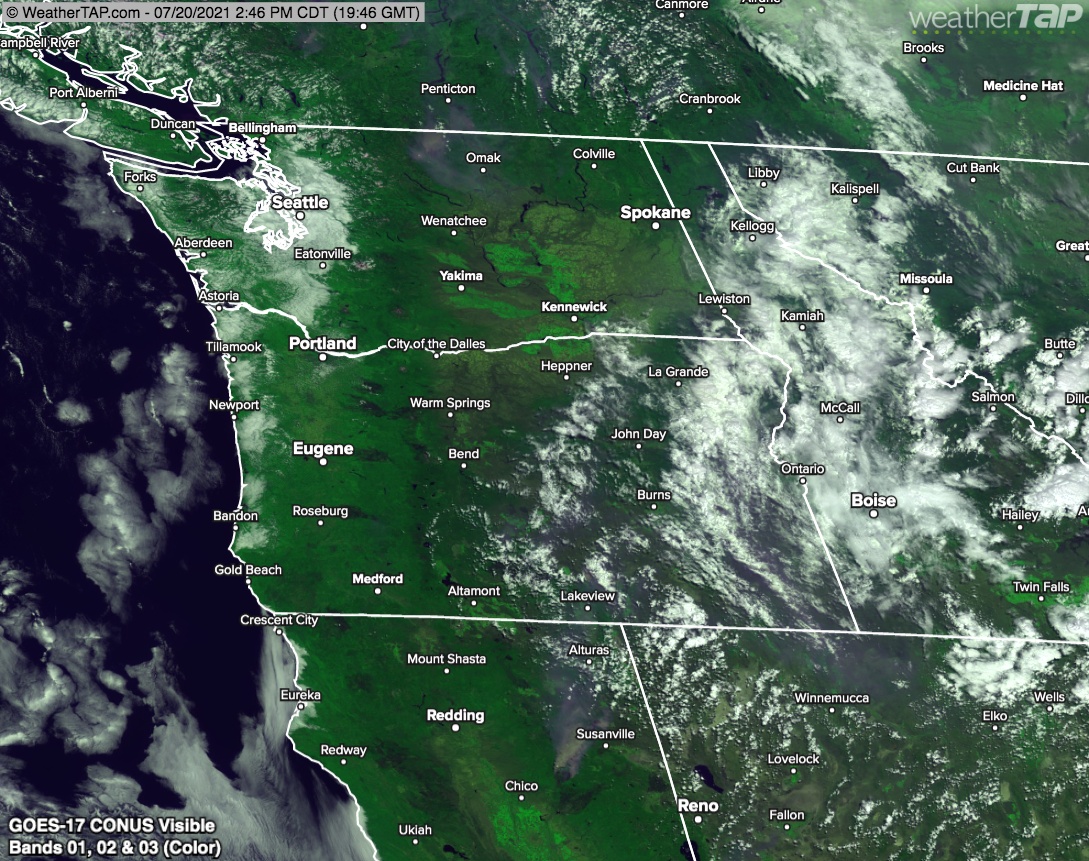 “Red Flag weather conditions played a significant role in fire behavior yesterday,” fire managers said in a statement Sunday. “Structure protection groups today will be focused on homes along the 34 and 28 roads.” The fire with its intense heat and massive smoke columns are now capable of producing their own weather system; the fire has generated multiple pyrocumulus clouds, and an extreme “firestorm” cloud, known as a pyrocumulonimbus, that generated high winds and lightning strikes. 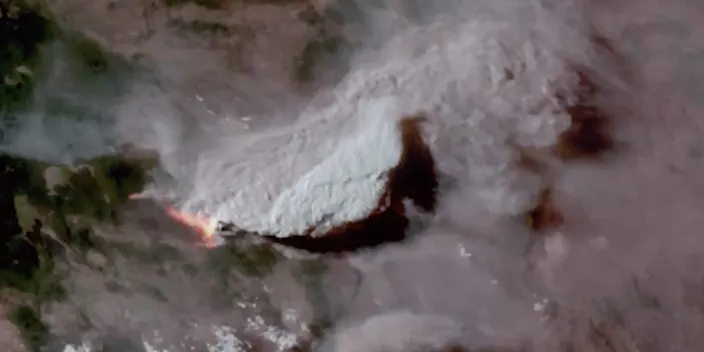 In Oregon, fire officials noted the Bootleg Fire is showing "aggressive surface spread with pyrocumulus development." Pyrocumulus clouds form when extreme heat from the flames of a wildfire force the air to rapidly rise, condensing and cooling any moisture on smoke particles produced by the fire. These clouds essentially become their own thunderstorms and can contain lightning and strong winds.

“It’s been a very tough incident to date. We have had day after day of explosive fire growth, which forces us to sometimes pull our firefighters back, to retreat. Essentially, to chase fire. It’s exhausting,” said Marcus Kauffman, a spokesman with the Oregon Department of Forestry’s Incident Management Team One. The prolonged drought is also fueling the fire conditions, and Kauffman anticipated the massive blaze will continue to grow. "The fire is burning dense fuels that are extremely dry from a prolonged drought. Up until today, the weather has been consistently hot, dry with near single digit humidity," he said. “We’re seeing the kinds of conditions, these kinds of extreme fire behavior at a time of year that we usually don’t see it.”

Winds from the southwest continued to push the fire east and north overnight. Fire managers released a map Sunday morning showing most of the growth came overnight along the fire’s east flank, stretching into Lake County. Fire officials said crews are building “contingency lines” to the north and south of the fire in case hot weather conditions prevent containment efforts.“These contingency lines may be used as the fire continues to march towards the communities of Paisley, Summer Lake, and Silver Lake,” fire officials wrote. The fire has already destroyed at least 67 homes, and is threatening another 3,100, according to the latest figures. Firefighters were able to save a significant local historic site, however. The Mitchel monument, near Bly, commemorates the site of the only American casualties on US soil during World War II. Historic markers and a shrapnel-scarred tree mark the place where five children and one woman were killed by a Japanese balloon bomb that had drifted across the Pacific.

The fire burned directly over the site, but firefighters were able to protect the monument from destruction by clearing brush and trees, spraying fire retardant, and wrapping the heritage tree and other parts of the site in fire-resistant material.

Residents living to the north and east of the fire should also expect significant smoke Sunday as winds push polluted air in those directions. Bruler Fire: The Bruler Fire in central Oregon has remained at 156 acres over the past few days since cooler temperatures, light winds and higher humidity helped firefighters by reducing fire activity, according to a Sunday morning statement from incident commander Brian Gales.

Some areas of Forest Service lands south of Detroit Lake, west of Highway 22 and north of Highway 20 remain closed as of Tuesday with some Wallowa County residents opting to stay behind and protect their homes, even as the Elbow Creek Fire has prompted Level 3 “Go Now” evacuation notices.

The Elbow Creek fire is burning around 10,940 acres along the Grand Ronde River basin, southeast of Walla Walla, Washington. The fire spread quickly after being ignited Thursday. Sheriff’s office officials told the Wallowa County Chieftain that a small number of residents have opted to stay behind and build protections around their homes rather than leave under an evacuation order. “There were a couple of people who did leave and there’s some staying,” Wallow County emergency services director Paul Karvoski told the paper. “Most of them aren’t even there, so you’ve maybe got only two or three homes up there with people actually in them.” The Elbow Creek Fire was around 10% contained as of Sunday morning, and threatens around 156 residences. 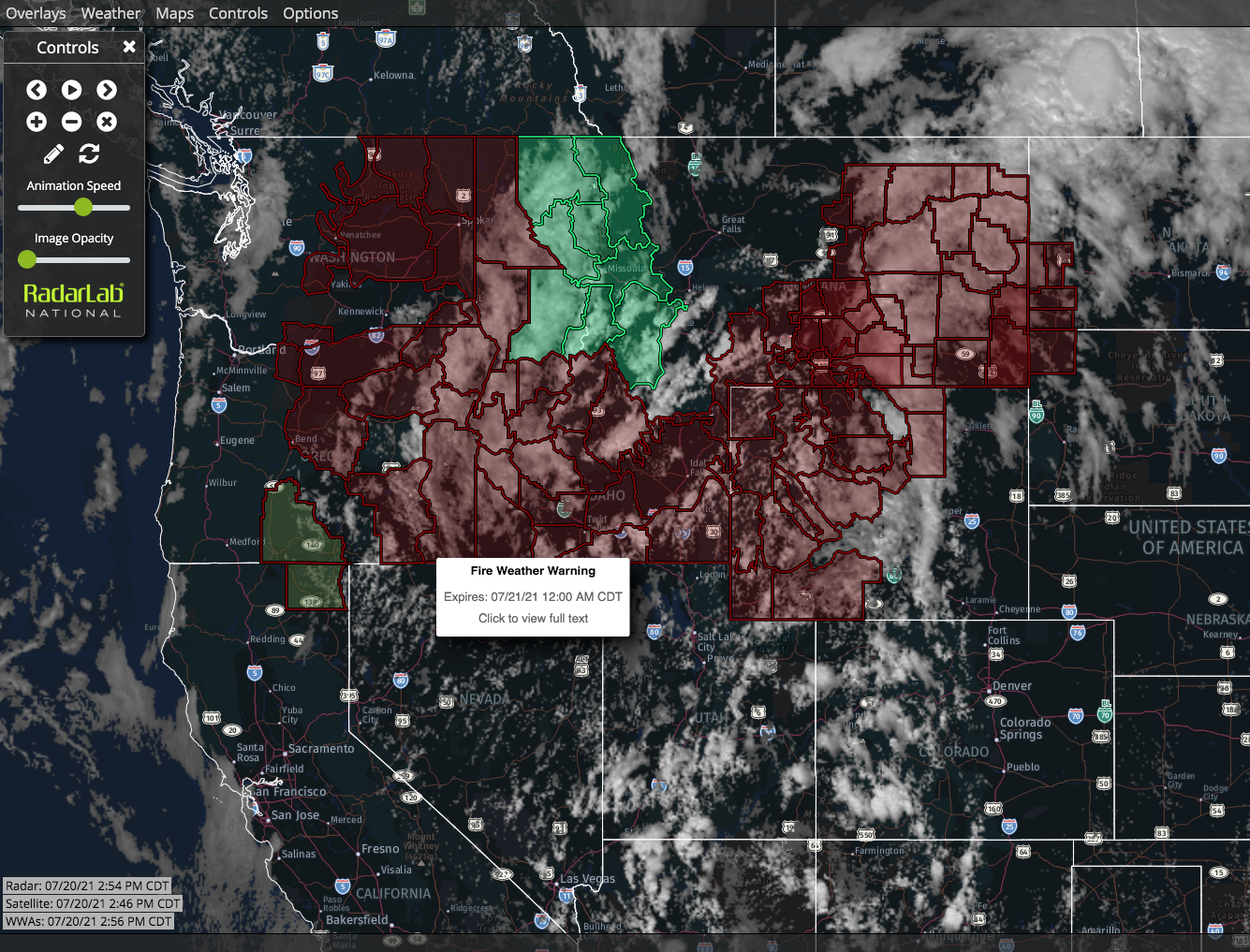 Large portions of the West remain under the threat of fire conditions Tuesday, with approximately 3.5 million residents under red flag warnings, according to the National Weather Service Weather Prediction Center. A red flag warning means "critical fire weather conditions are either occurring now, or will shortly," the prediction center said. Excessive heat warnings will continue for more than 337,000 people, and nearly 650,000 more are under a heat advisory.

Temperatures in the region will remain up to 10 degrees above normal over the next 48 hours, CNN Meteorologist Michael Guy said. There's also a chance of dry storms, which lack the precipitation that is desperately needed to help calm the flames. While some sporadic rain is possible across the Intermountain West, "this is not really going to do much in the way of fighting any of the wildfires out West," Guy said. "Some rain may fall from afternoon storms, but it not be enough to stop or put out the fires that are ongoing," he said.

The month of July has been full of natural disasters and extreme weather events. Get thousands of weather images in real-time with us at weatherTAP.com. Start your free trial today. No credit card information required at sign-up.

Wednesday night, Hurricane Pamela made landfall along the west coast of Mexico. As the storm continues to weaken, moisture from Pamela is spreading across the mountains of northern Mexico into Texas and the southern Plains, where the threat of flooding will continue through Friday.