You may have seen weatherTAP's satellite products and wondered what the difference was between them. Today, we'll talk a little bit about IR and visible satellite imagery. The next product on our list is the radar/satellite overlay under the Forecast tab. This particular overlay alternates between using IR and visible satellite. The visible is used by this product during daylight, and IR is used at night, though IR can be used during day or night.

The IR sensor detects the amount of thermal (heat) radiation being emitted into space from the earth and its atmosphere. All objects radiate IR light because all objects radiate some type of thermal energy. IR satellite sensors can detect the temperature of an object by the character of the IR light it emits. The warmer the temperature, the grayer it appears on satellite. The colder the temperature, the whiter something appears on the satellite image. So, clouds should appear whiter than the surface, since they're colder. Some problems from IR satellite imagery include clouds that are really low to the ground and nearly the same temperature as the ground (i.e. fog). The low clouds will show up as nearly the same color grey as the ground and are very difficult to see. IR satellite works any time, day or night, which is helpful in tracking storm systems at night.

IR's counterpart, visible satellite, is only useful during the daytime, because it relies on sunlight reflected up to the satellite. Visible satellite has a much better resolution than IR and can be used to detect smoke, fronts, and other subtle surface boundaries. 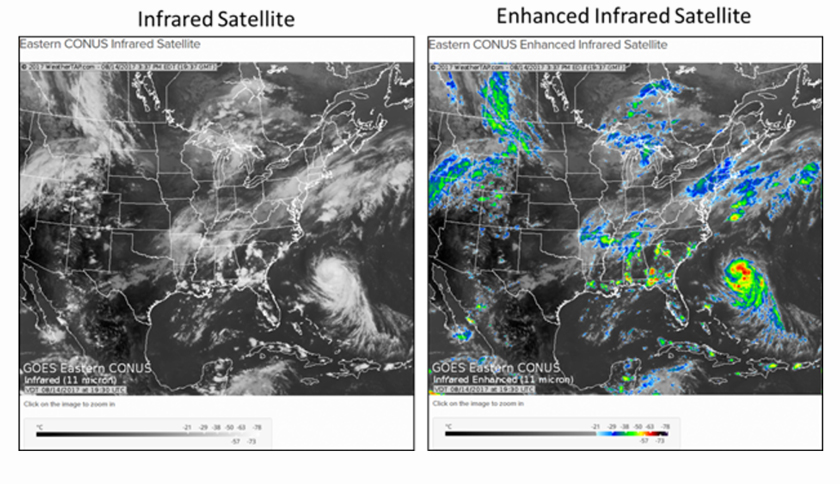 This morning, the north-eastern US braced as for the first big winter storm of the season as snow began dropping what forecasters said could be more than a foot of wet, heavy snow, making travel treacherous and cutting off power to thousands.

Two tropical systems are heading toward the Gulf of Mexico, and both of them may form into hurricanes before reaching the U.S. mainland early next week.