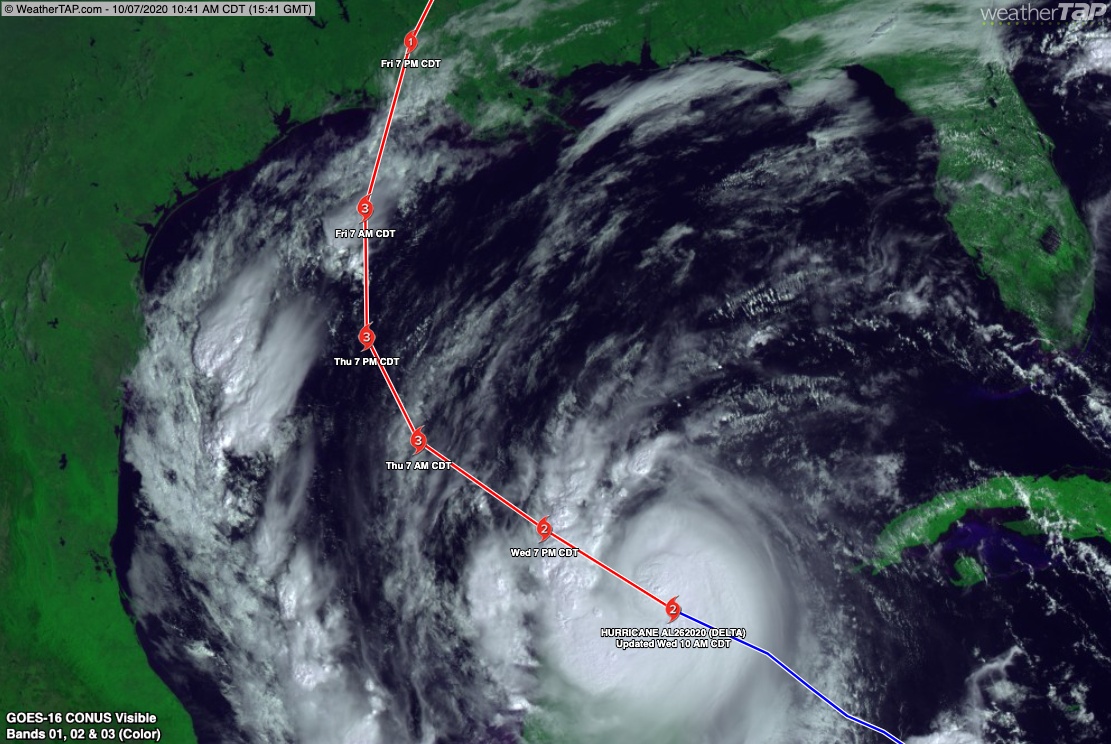 Hurricane Delta made landfall on Mexico's Yucatán Peninsula as a Category 2 storm around 6:30 a.m. ET, with winds estimated at 110 mph. The hurricane made landfall near Puerto Morelos north of Cozumel, around halfway between Playa del Carmen and Cancún. Mexico's national meteorological service cautions that Delta is causing waves from 5 to 9 meters high in northern Quintana Roo. Delta’s winds have fallen to 105 mph as it crosses over land, however, forecasters warn that it will restrengthen when it returns to the warm waters of the Gulf of Mexico possibly becoming a Category 4 hurricane again by late Thursday. 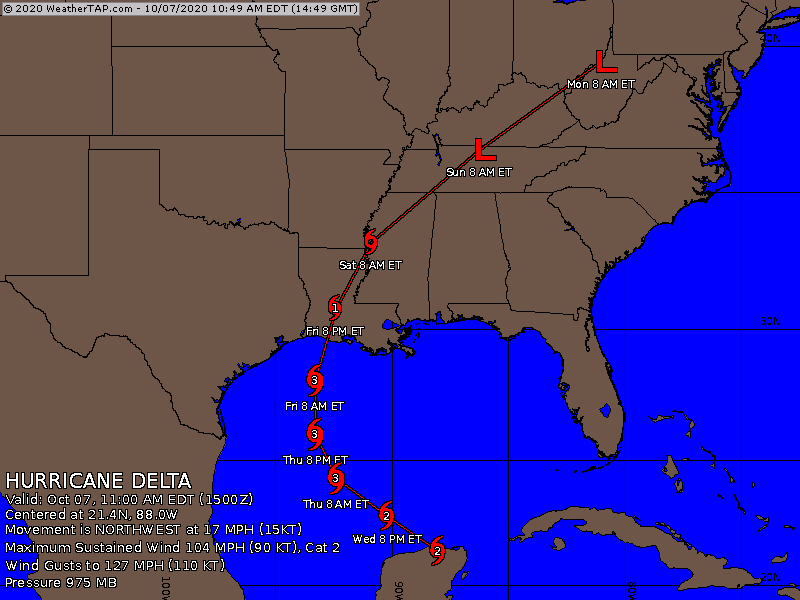 The storm is expected to reach the U.S. Gulf Coast on Friday. The National Hurricane Center warns that there is an increasing likelihood of life-threatening storm surge and dangerous hurricane-force winds, especially along the coasts of Louisiana and Mississippi, beginning on Friday. 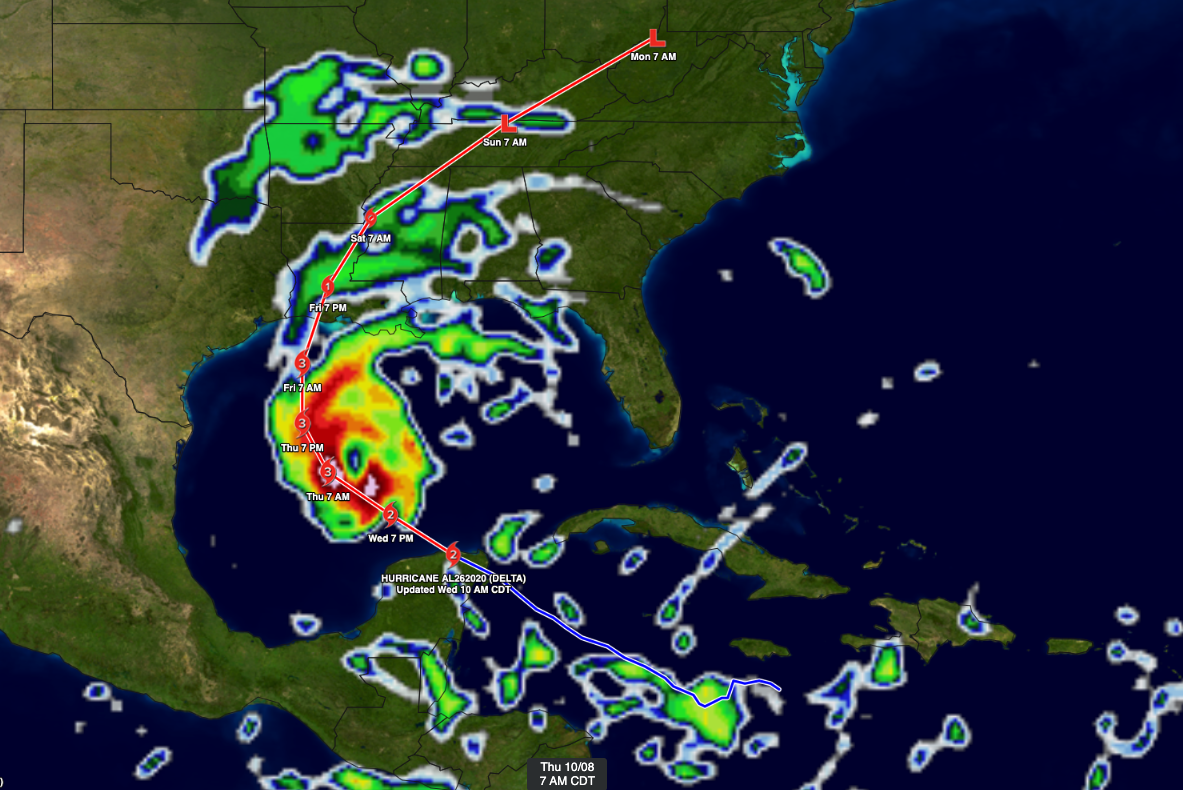 Hurricane Delta could bring between 4 to 8 inches of rain, with isolated maximum amounts of 12 inches, to the central Gulf Coast through parts of the Lower Mississippi Valley. The heavy rainfall could result in flash, urban, and small stream flooding and minor river flooding. The rainfall is expected to eventually continue to spread into the Tennessee Valley, and interior southeastern United States this weekend into early next week, according to the hurricane center. 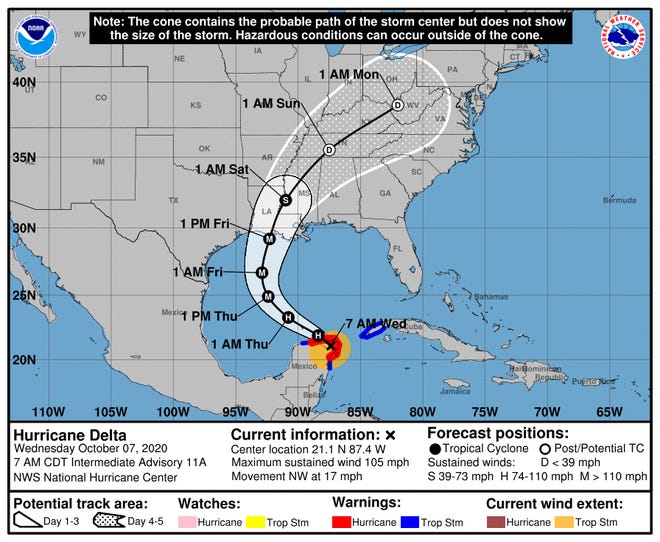 Louisiana is still recovering from Hurricane Laura that made landfall on August 29th, however, Louisiana Gov. John Bel Edwards assured residents that State and local officials in coastal areas are shoring up levees, sandbagging and taking other protections. Storm surge and hurricane watches will likely be issued for portions of the northern Gulf Coast later Wednesday giving residents two days to prepare for a possible emergency.

This hurricane season has been incredibly active. Monitor the storms with us at weatherTAP.com! Start your free trial today. No credit card required at sign-up.