weatherTAP > Blog > For the Second Time on Record, Five Tropical Cyclones Swirl in the Atlantic at The Same Time 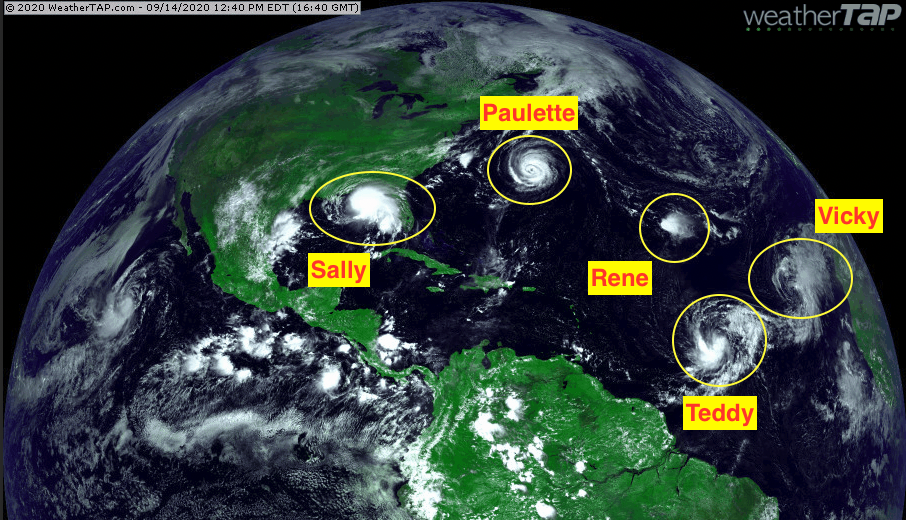 For the second time on record, there are 5 Named Storm systems in the Atlantic Basin. While the Gulf coast prepares for Hurricane Sally, forecasters are monitoring the Atlantic for further development of the storms. 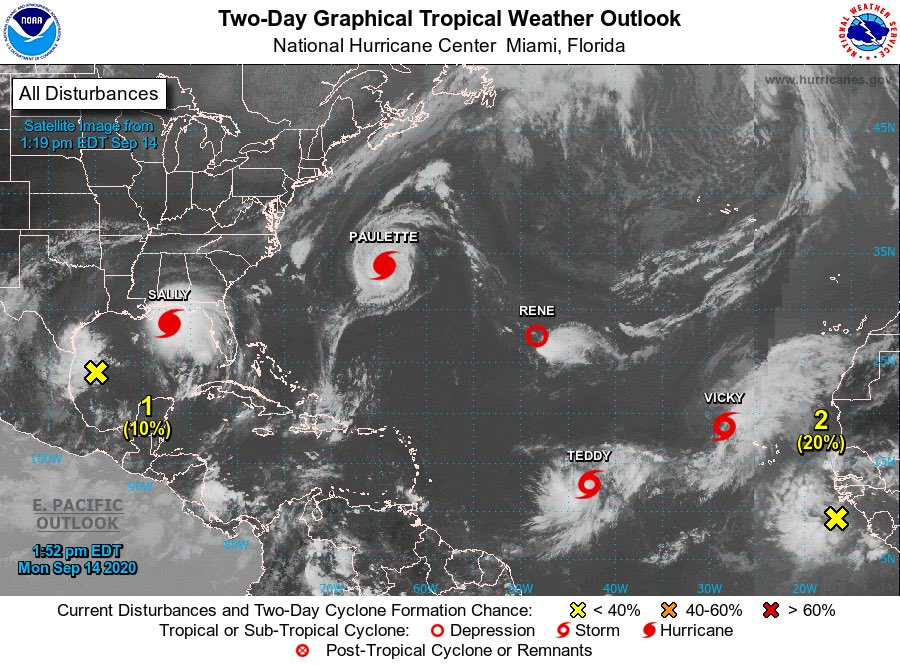 Early this morning, Hurricane Paulette made landfall in Bermuda. Although Paulette is departing Bermuda, hurricane conditions are still impacting the island with strong winds, storm surge and rainfall will likely continue into Monday. 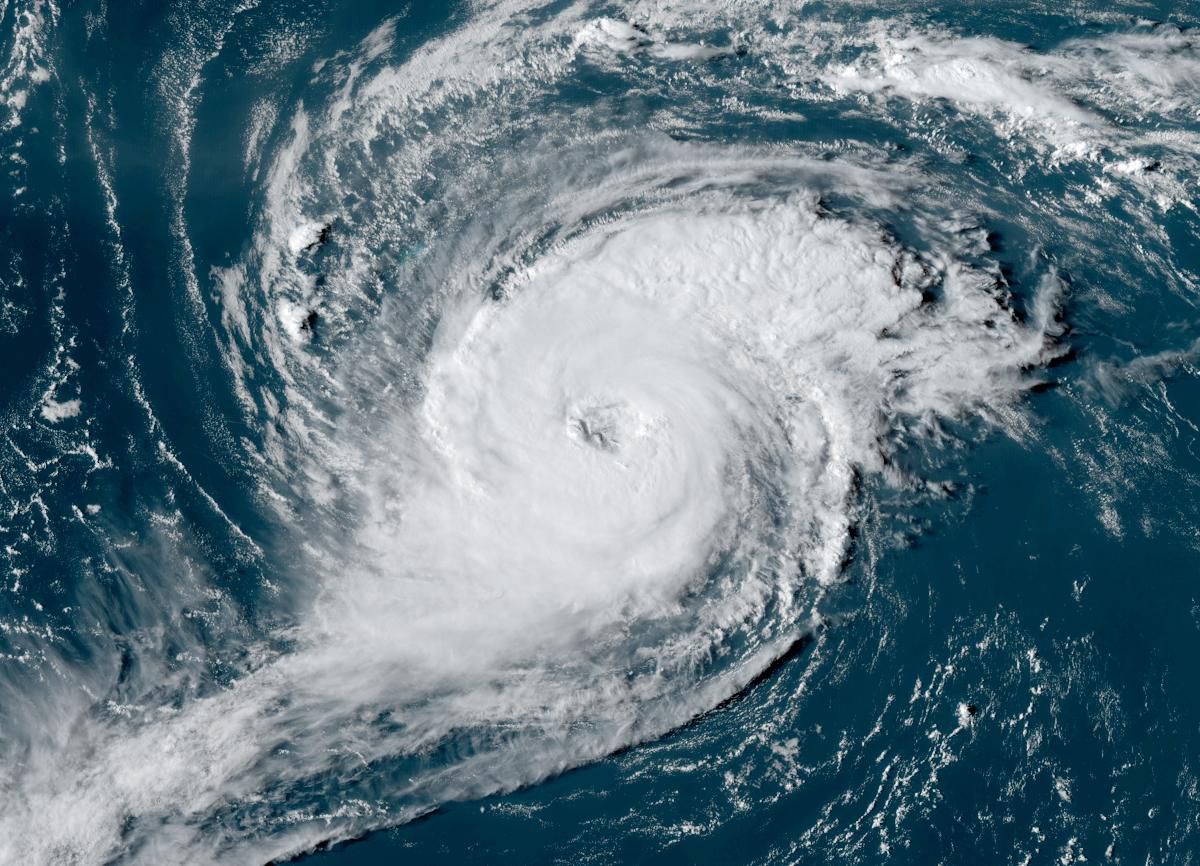 The National Hurricane Center warns swells produced by Paulette are affecting portions of Leeward Islands, the Greater Antilles, the Bahamas, and the United States that could cause life-threatening surf and rip current conditions.

Forecasters are predicting Paulette to continue to strengthen as the storm moves into the open Atlantic. Paulette could become a major hurricane if the storm continues to develop, reaching wind speeds of at least 111 mph. If this does occur it would only be the second hurricane to achieve this distinction so far this season. The Atlantic Hurricane Season typically averages 3 major hurricanes in total.

Tropical Depression Rene, which had once been a tropical storm this past weekend, will continue to weaken as it tracks through the central Atlantic Ocean. This storm is not expected to impact any land and is also forecast to dissipate within the next two days.

Hurricane Sally is currently headed northwest through the Gulf of Mexico. Mandatory evacuations are already underway for low-lying areas along the Gulf Coast. Forecasters from the National Hurricane Center in Miami said Sally was expected to reach shore by early Tuesday, bringing dangerous weather conditions, including risk of flooding, to a region stretching from the western Florida Panhandle to southeast Louisiana.

Governor John Bel Edwards urged residents to prepare for the storm immediately. He also said there are still many from southwestern Louisiana who evacuated from Hurricane Laura into New Orleans which is exactly the area that could be hit by Sally. 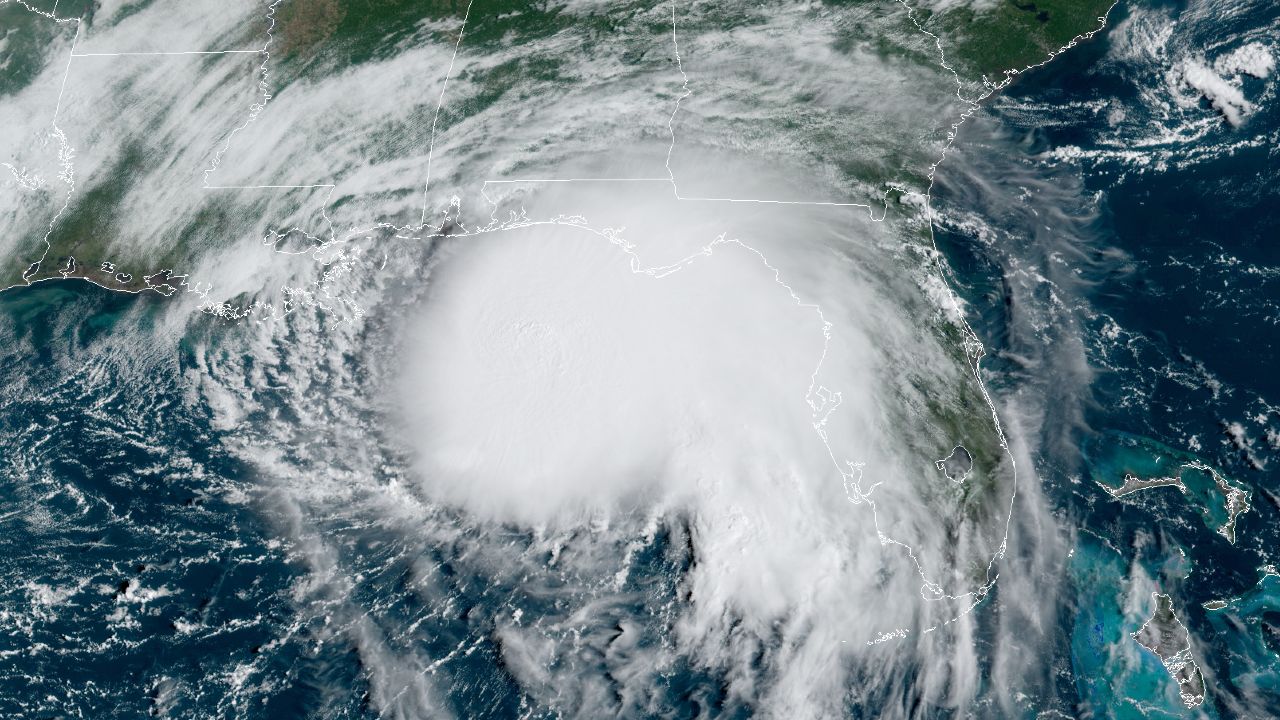 The latest advisory from the National Hurricane Center in Miami showed the system was moving west-northwest at 6 mph Monday with maximum sustained winds of 85 mph. It was centered 135 miles east-southeast of the mouth of the Mississippi River, and 175 miles southeast of Biloxi, Mississippi. Because the the storm is slowing down, Sally is expected to produce a tremendous amount of rainfall over the coming days. 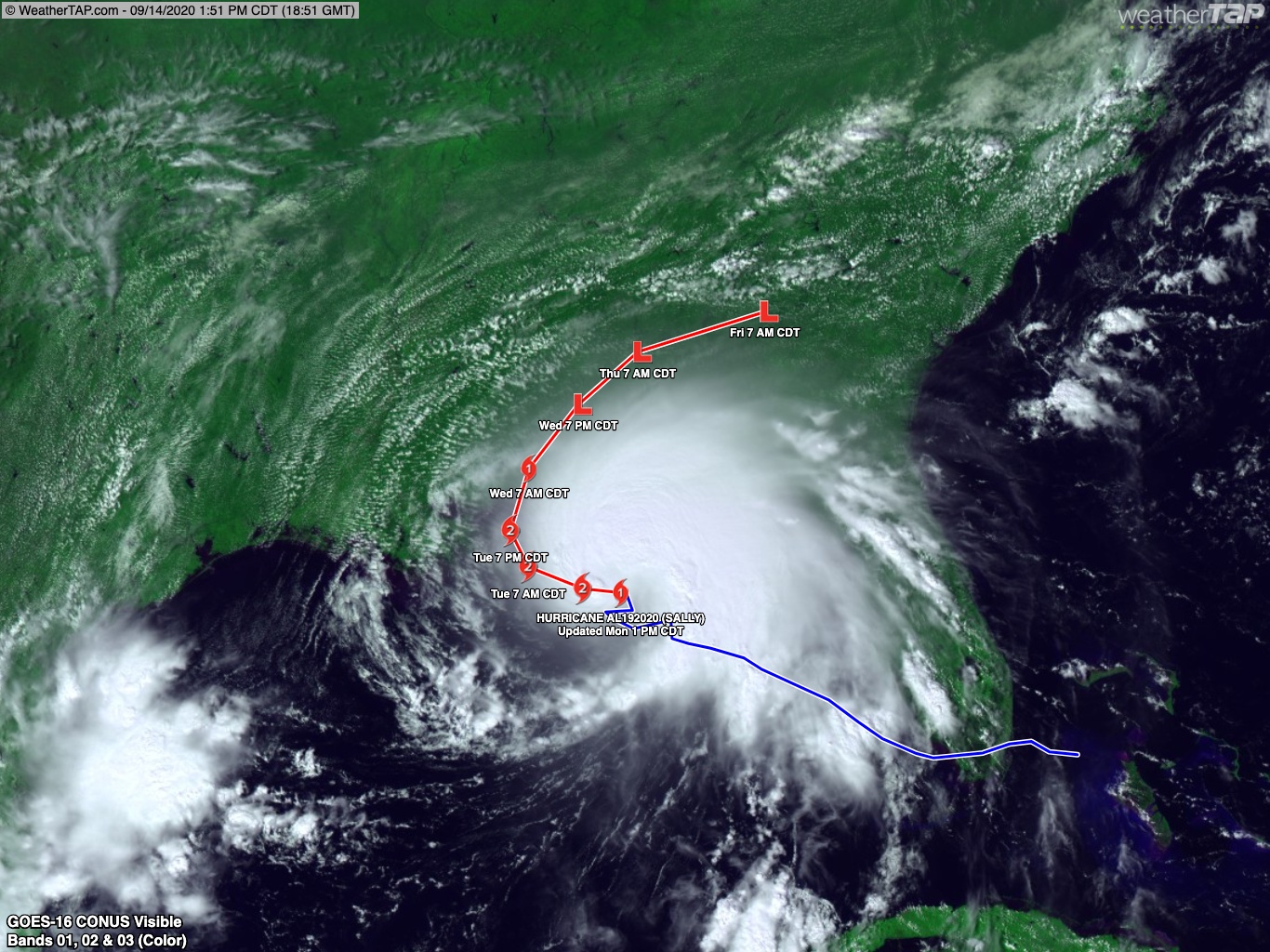 As of right now, Sally is forecast to make landfall either Tuesday or Wednesday around the Louisiana-Mississippi state line. The National Hurricane Center cautions that people along the coast should not focus on the specific details of the track, but rather the overall impact of the storm. The biggest threat of this storm is the dangerous amount of water predicted on the coast. The NHC is calling for "life-threatening storms surge and flash flooding." The highest storm surge is expected to be just to the east of where Sally makes landfall. Right now the NHC is forecasting 7 to 11 feet of storm surge from the mouth of the Mississippi River east to Ocean Springs, Mississippi, including Lake Borgne. Rising waters from the surge is expected to be felt as far west as Burns Point, Louisiana, and as far east as Saint Andrews Bay, Florida. Widespread rainfall totals along the Gulf Coast from Louisiana to the panhandle of Florida are forecast to be between 6 to 10 inches; however, some areas could receive up to 2 feet of rainfall.

The newest to form, Tropical Storm Vicky, formed with maximum sustained winds of 45 mph on Monday morning. Forecasters said that Vicky, should be a short-lived tropical cyclone, as increasing southwesterly shear is expected to quickly weaken Vicky to a depression within a few days. Tropical Storm Vicky is currently over the eastern Atlantic, just a few hundred miles west of the Cabo Verde Islands. Vicky is the earliest 20th Atlantic named storm on record, breaking the previous record set by Tammy on October 5, 2005. Vicky is expected to encounter unfavorable conditions in the next couple of days, which will limit its development and intensification. 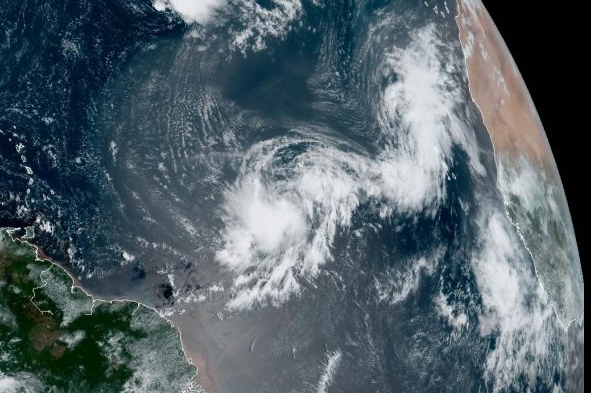 Tropical Storm Teddy is currently in the central Atlantic, well over 1,000 miles east of the Lesser Antilles. Teddy is expected to intensify and develop into a hurricane over the next few days. If this occurs, Teddy will be the eighth hurricane of this year's Atlantic Hurricane Season, behind Sally. By the end of the week Teddy is forecast to become a major hurricane (Category 3 or higher) as it approaches Bermuda. It is too early to tell at this time whether it will directly hit Bermuda.

This hurricane season has been extremely active. Monitor the storms with us at weatherTAP.com! Start your free trial today. No credit card information required at sign-up. Follow us on social media for more weather updates and information.

A large and intense Spring storm system will bring widespread severe weather to the Lower Mississippi Valley and Southeast states this evening, overnight, and into Saturday. Damaging straight line winds is the primary concern, but hail (very large in some storms) and isolated tornadoes will also be possible

Broadcast live weather to your social media audience with ease.