weatherTAP > Blog > Everything You Need to Know About Weather Forecasts

Everything You Need to Know About Weather Forecasts

If you click on Forecast, the very first option is U.S. Current Temperatures. Have you ever wondered where those temperatures come from? Those temps come from METAR sites, which is basically a fancy way of saying that they come from airports. A METAR is a Meteorological Terminal Air Report. By the way, meteorology is famous for acronyms! (ha)

METARs are reports that pilots make good use of. I'll have more on METARs when we get to the aviation stuff under the aviation tab. Just an FYI, the correct way to take temperature is within a white box, protected by wind but with sufficient ventilation, about 4 feet off the ground. I have a picture below of one. This is a typical METAR temperature-taking device. 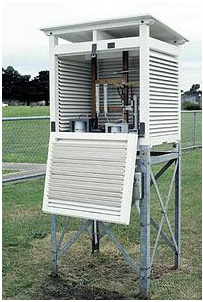 Notice I said it has to be four feet off the ground. This is why we can get frost when the temp is in the mid 30s. On clear, calm nights the ground cools off faster than the air above it. It has to be 32 degrees for water to freeze. The air right at the ground may be 32, while the air four feet above is 35 degrees.

The EarthCast global model is run twice a day (7:00a.m / 7:00p.m.), producing a 36-hour forecast. It is a full Earth System Model, which means it takes into account the atmosphere, land, and oceans and not just the atmosphere alone. The model is run with cloud-resolving physics, something that no one else is doing.

The model goes out to 36 hours from the run time. You can select if you want just satellite, just radar, or a combination of the two. The farther in time one goes out from the model run, the less accurate the model is liable to be. For instance, if the model is run at 7:00 a.m. it will be most reliable within the first few hours after 7:00, and much less so by the afternoon.

Have you ever wondered what a mosaic is? That's just simply the combination of the data of multiple radars. It makes it look like the country is covered by one giant radar, when it fact it's covered by 159 NEXRAD radars. (Remember, the TDWR radars only cover the airports and the area closest to them.)

Once on the map, you can click on it to zoom in. The first map is national, the second regional, and the most zoomed-in one is state-level radar, which also outlines the counties. Radar basically sends out a signal. If that signal strikes something (ie. Rain drop, hailstone) it returns to the radar. The radar receiver detects this return and uses that information to determine how large the struck object was. For instance, if the radar strikes a hailstone, the radar return will be much stronger (show up brighter on your radar) than if the radar hit a raindrop (that would show up as a lighter color on your radar).

Radar sites can only be found near National Weather Service offices. This can mean that some areas have very poor coverage. Notice the gaps in coverage on the map below. 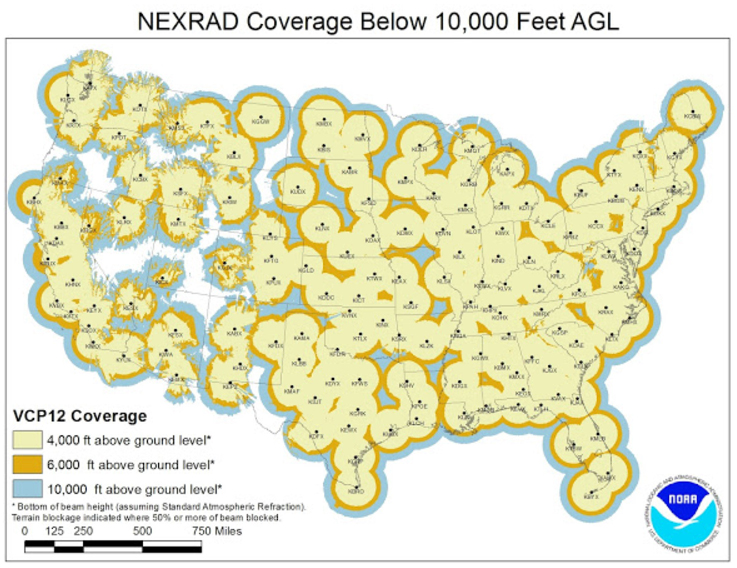 Complete radar scans are done every 4.5 to 10 minutes, depending on the setting. If there's nothing going on, it will be set to scan every 10 minutes. Notice that even on its best day it scans every 4.5 minutes. This is why some chasers get caught off guard. A LOT can happen in 4.5 minutes.

So, is there level I data? Yes! Level one is the raw data that comes straight from the radar with no quality control done to it. It's a mess!

Level II is much different. With this data, each pixel size is the same, no matter how far away from the radar it is. This is also called super resolution data. Data has been filtered to get rid of buildings, mountains, and other obstructions that are always there. This data can be "smoothed" to look better to users.

Level III is even more processed but you only get 4 scans of a storm. These four scans are of the lowest levels of the storm. Now, while there are fewer scans with level III, you get a LOT of information from these few scans. You get your precip estimates, vertically integrated liquid, TVS signatures, mesocyclones, hail indicators, storm relative velocity, etc etc from just these four, data-heavy, scans. You may notice some of these products on RadarLab HD+, but we'll talk about them in more detail when we get to that point.

That is all for now! We'll talk about echo tops next time.