weatherTAP > Blog > Everything You Need to Know About Surface Map Analysis

Everything You Need to Know About Surface Map Analysis

Being able to analyze a surface map is crucial to understanding the weather. I have attached a recent surface map to help you follow along. You'll immediately notice the blue 'H's and red 'L's. These are high and low pressure areas, respectively. Air rises in low pressure. Since temperatures decreases with height, this rising air cools and condenses into clouds, thus, the weather around low pressure is cloudy/stormy. Air sinks in high pressure. Sinking air compresses, warms and dries out. Therefore, the weather around high pressure is often cloudless. 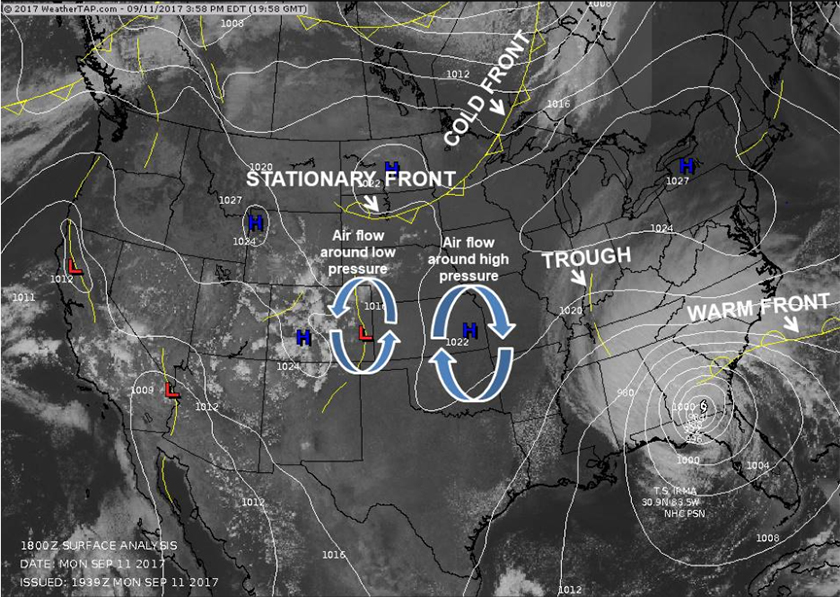 Also, wind always blows from high to low pressure. In fact, wind is the direct result of pressure imbalances. Wind is nature's way of balancing the pressure fields. The more imbalanced pressure becomes between two areas, the stronger the winds will be between these two areas. For example, the air pressure inside a tornado is really, really low. That makes the pressure incredibly imbalanced between the location of the tornado (low pressure) and locations surrounding the storm, creating severe winds that work to try to balance the pressure differences.

The white lines you see on the map are called isobars. These are lines of equal pressure, connecting places that have the same pressure readings. The closer the lines are to each, the more quickly pressure changes with distance. This pressure imbalance will cause stronger winds. Notice the isobars are so close to each other across the Southeast. This is Tropical Storm Irma on September 11, 2017. Sustained winds at the time of this image were 60 mph.

Fronts do the same thing. When air converges at a front it is forced to rise. Fronts represent the boundaries between different air masses with different temperature and moisture characteristics.

Air rises quicker along cold fronts, so you often see your stormiest weather along them. They are the line with the triangles. The triangles point in the direction the front is moving. There is one stretching from Canada into Minnesota on the map. If it is moving at less than 5 mph, it is called a stationary front. A stationary front has triangles and half circles alternating along it. You can see one stretched across South Dakota on the map. Air rises more gently along a warm front. This usually leads to more widespread, gentle rainfall. Warm fronts are the lines with half circles along them. The half circles point in the direction the front is moving. There is one extending eastward from Irma on the map. You'll also notice the dashed lines. These are areas of lower pressure that we call troughs. They're basically weak disturbances that don't have a great enough temperature or moisture difference around them to be a front, but they do represent an area of lower pressure.

During the warm season months, you may notice a dry line front moving across Texas and Oklahoma. These fronts separate dry, desert air to the west from warm, moist air in the east. These fronts move from west to east through the day and can cause severe thunderstorms. The front is drawn like a warm front, with the half circles pointing in the direction of movement, but unlike a warm front, the half circles touch each other all along the front.

Also, on this map you see the L for low pressure over the California/Arizona border. That represents a thermal (heat) low in that desert area. Warm air rises and air in the Desert Southwest gets REALLY warm. That rising air creates a flow of moisture that will move in from the Pacific and the Gulf of California, leading to rainfall. We call this the monsoon, which is just a seasonal pattern of wind that develops.

Anytime air converges, or comes together, it is forced to rise. As air comes across the Pacific Ocean it doesn't encounter anything to slow it down until it reaches the West Coast of the US. Then, the friction of the land slows that wind down and causes air to converge along the coast. Since converging air must rise, an area of low pressure forms along the coastline. This can also lead to rain showers.

Hopefully, this has been a good crash course in basic weather map reading!

Remnants of a Pacific tropical storm may reform in the Gulf of Mexico within the next few days. Today June first, marks the beginning of hurricane season which will run until November 30th.

Across the Northeast, a powerful nor'easter brings a historic snowfall resulting in school cancelations, disrupted travel plans and rescheduling of vaccination appointments as the storm threatens to dump up to two feet of snow in parts of the region.