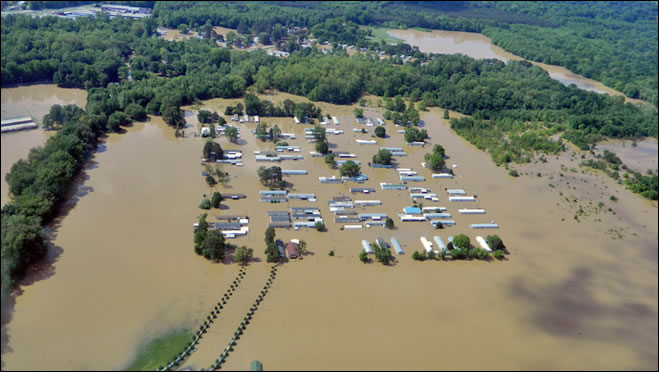 As of Monday afternoon, 22 people were found dead and 40 others missing after heavy rain and extreme flash floods overwhelmed parts of Middle Tennessee. The Tennessee Emergency Management Agency said Monday that 93 people stayed in shelters overnight as the flooding unleashed. The damaging storms have destroyed homes, toppled trees and upended cars. Twenty of the deaths were in Waverly, a small city about 75 miles west of Nashville. The Humphreys County Emergency Management Agency said approximately 40 additional people are still currently unaccounted for. According to the Waverly Department of Public Safety, several of those missing are children. "We have resources searching inch by inch, in and out of debris," the department said.

Among those declared deceased, two were twin 7-month-old infants who were swept away in the floods, according to the Humphreys County Emergency Management Agency. The siblings' bodies had been recovered, Sheriff Chris Davis told NBC affiliate WSMV of Nashville. Another was the best friend of the sheriff, Davis told WSMV Sunday "He drowned in this", Davis said, adding that he gets "emotional" if he slows down and talks about the disaster. "If I stay working and focused, we work through it." WSMV reports The foreman of an event venue and ranch owned by the country music icon Loretta Lynn also died in the floods, the ranch said Sunday. Images published by local news outlets showed the venue, about 11 miles south of Waverly, inundated by flooding, and in a Facebook post, the ranch said the foreman, Wayne Spears, was swept away by floodwaters. "Wayne has been a family friend to the Lynns and a fixture to the Ranch for decades and we are all devastated by his passing," the ranch said. Davis said authorities spent Sunday responding to 911 calls, conducting welfare checks and trying to get a picture of how badly damaged the area was.

The flooding occurred after what most likely was record rainfall, the National Weather Service's office in Nashville said. More than 17 inches of rain in 24 hours was recorded in Humphreys County on Saturday, likely surpassing the previous record of 13.6 inches set in 1982, the agency said. 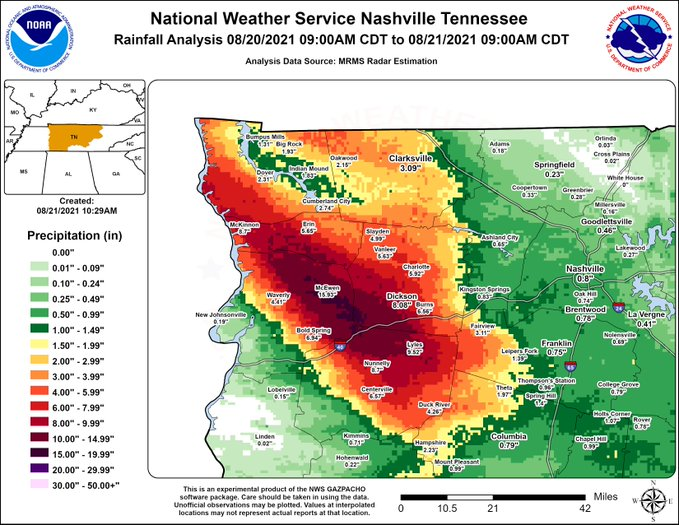 As the county recovers and continues search and rescue efforts, Humphreys County schools have announced that they will be closed for the rest of this week. Residents using the Waverly Water Supply were still instructed to boil water for consumption Monday, and 2,000 homes remained without power. Multiple bridges and roadways are still closed, according to the Tennessee Emergency Management Agency, which was assessing damage with the Federal Emergency Management Agency. Phone services are gradually being restored. As homes were swept off foundations, and cars were left strewn across the area, officials said. Emergency 911 service was temporarily disconnected, however they are now functional.

Anyone seeking shelter in Humphreys County is advised to go to the following locations:

The Red Cross has also set up an online resource, so flood survivors can register and let family and friends know they are safe. To access this resource, click here.

The peak of Hurricane Season is almost here but it's still pretty quiet. What does it actually take for a storm to form and grow?

The 2022 Atlantic Hurricane Season has been pretty quiet so far but we are only a month away from the peak on September 10th. We’ve only have three tropical storms form so far this year, Alex, Bonnie and Colin. The atmosphere hasn't been very conducive for tropical development but what does that really mean?

Hurricane Laura, a major Category 4 storm, is set to hit near the Texas-Louisiana border on Thursday morning as local officials scramble to evacuate thousands of residents.