A parade of cyclones continue to bring devastating conditions to California

Californians have been dealing with a parade of storms since the end of the year which has led to many power outages, widespread flooding, mudslides, collapsed roadways and unfortunately killed 12 people. President Joe Biden has declared a state of emergency for the region on Monday.

90% of Californians are under Flood Watches as the latest wave of strong winds, torrential rain and heavy snow hits California. Some warn that this current cyclone is stronger than its predecessors and could force major highway closures from Monterey to Santa Barbara. 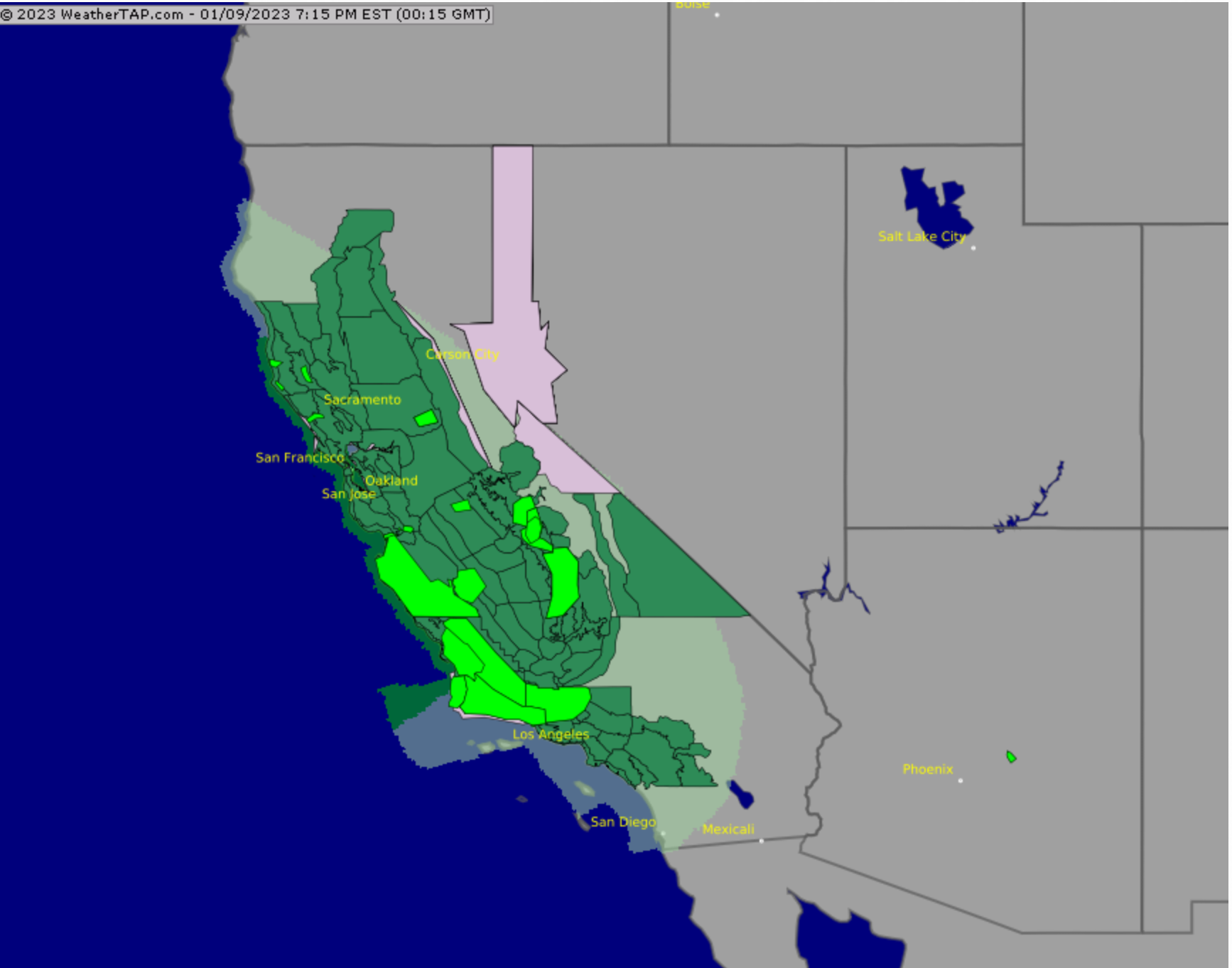 Flooding has been a major issue and it’s not surprising because at one point Monday morning, 1” - 1.25” rainfall rates per hour were recorded near the Diablo Range.  Rivers are approaching or surpassing flood stages from Sacramento to Los Angeles.

Some locations have picked up a half a foot of water in the last 7 days and an additional 3” - 5” or rain is possible through midweek.

There’s a high risk of excessive rainfall in California Monday and a moderate risk on Tuesday.

Flooding will be likely with rapid water rise in small streams and creeks, also, recent burn scars will be at risk for debris flow and rapid runoff.

Heavy snow will accumulate this week as well with 6 feet possible in the Sierra Nevada. Red Peak in Yosemite National Park is forecast to receive 153” of snow in the next 5 days and over 23 feet in the next 10 days!

This will add to the current impressive snow depth.

What is causing all these storms along the west coast? It’s the weather phenomenon called the Atmospheric Rivers. These are relatively long, narrow regions in the atmosphere - like rivers in the sky - that transport most of the water vapor outside of the tropics. These columns of vapor move with the weather, carrying an amount of water vapor roughly equivalent to the average flow of water at the mouth of the Mississippi River! When the atmospheric river makes landfall, they often release this water vapor in the form of rain or snow.

These atmospheric rivers are California’s version of hurricanes and this year the NOAA Hurricane Hunters have been helping by measuring how strong they are.

There is one positive about these storms, it’s a huge benefit for the state because they are essential to the water supply and for the multi-year drought.

Powerful Winter Storm will affect millions leading up to Christmas

An arctic blast and strong storm system will move across the Lower 48 this week leading to treacherous travel conditions just days before the Christmas holiday.

It's been one year since the 2021 December tornado outbreak but how rare are they?

One year ago 71 tornadoes touched down across 8 states in a 24 hour span. It seems like these type of outbreaks are occurring more and more but are they still considered rare for this time of the year?

The 2022 Hurricane Season will go down as a "near normal" year but that doesn't mean we didn't see any destruction and devastation.