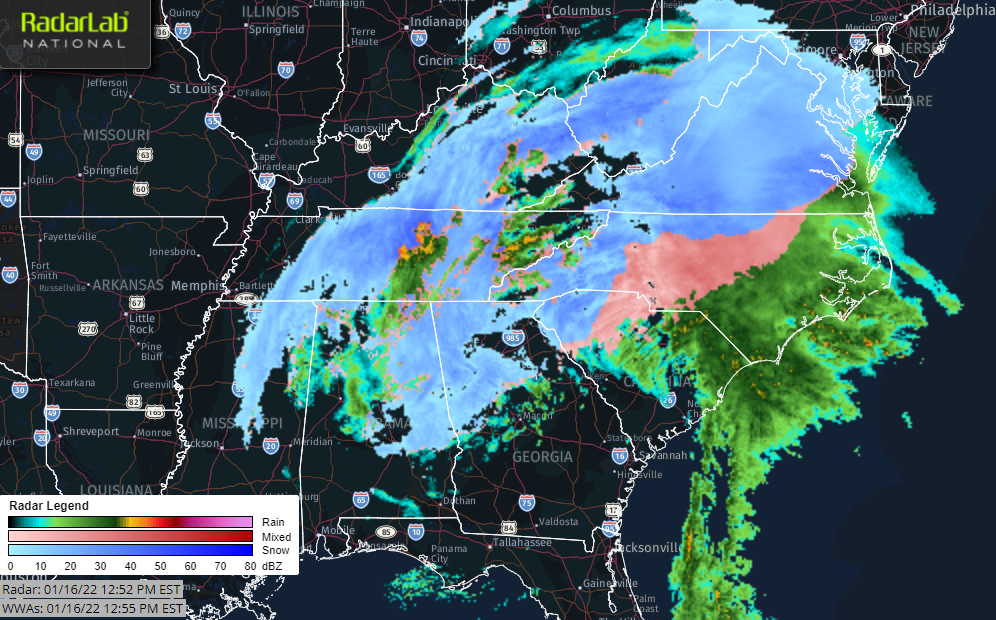 Winter weather alerts extend across the eastern US stretching over 1,400 miles from Mississippi to Maine, an area that represents as many as 80 million people, CNN meteorologists said.

"I am particularly concerned for the impending ice storm that will impact the interior of South and North Carolina. Following a round of heavy snow, up to 3/4 of an inch of ice could accumulate," meteorologist Derek Van Dam stated. "This will certainly bring power outages in the area as winds gust over 40 mph," he added.

Freezing rain was reported in the central Piedmont region of North Carolina on Sunday morning, according to the Storm Prediction Center (SPC). Freezing rain was forecast to continue across portions of central. North Carolina through the morning hours. Snow was falling across southeastern Virginia and was forecast to gradually change over to freezing rain. As of Sunday morning, about 200,000 customers were without power in the southeast, including over 100,000 in Georgia and more than 40,000 in each of Florida and South Carolina, according to the website PowerOutage.US. As much as a foot of snow could fall near the edge of the Blue Ridge escarpment in Greenville and as much as 20 inches of snow could accumulate above 4,000 feet of elevation in that area. A tenth of an inch of ice is also possible. The National Weather Service (NWS) has issued an ice storm warning for portions of South Carolina, in effect through early Monday, with temperatures likely to remain sub-freezing until the start of next week.

"Significant amounts of ice accumulations will make travel dangerous or impossible. Travel is strongly discouraged," according to the NWS office in Greenville. Charlotte could get up to a foot of snow in the foothills, and possibly as much as a half-inch of ice. Raleigh is expected to get up to 2 inches of snow and maybe a quarter-inch of ice, forecasters said. The NWS is warning ice accumulations will become very dangerous along and east of I-85 including Spartanburg, South Carolina, all the way up to Salisbury, North Carolina. This includes the entire metro Charlotte area. "The highest snowfall totals are expected along the spine of the Appalachians as well as across the lower Great Lakes," the National Weather Service reported early Sunday. 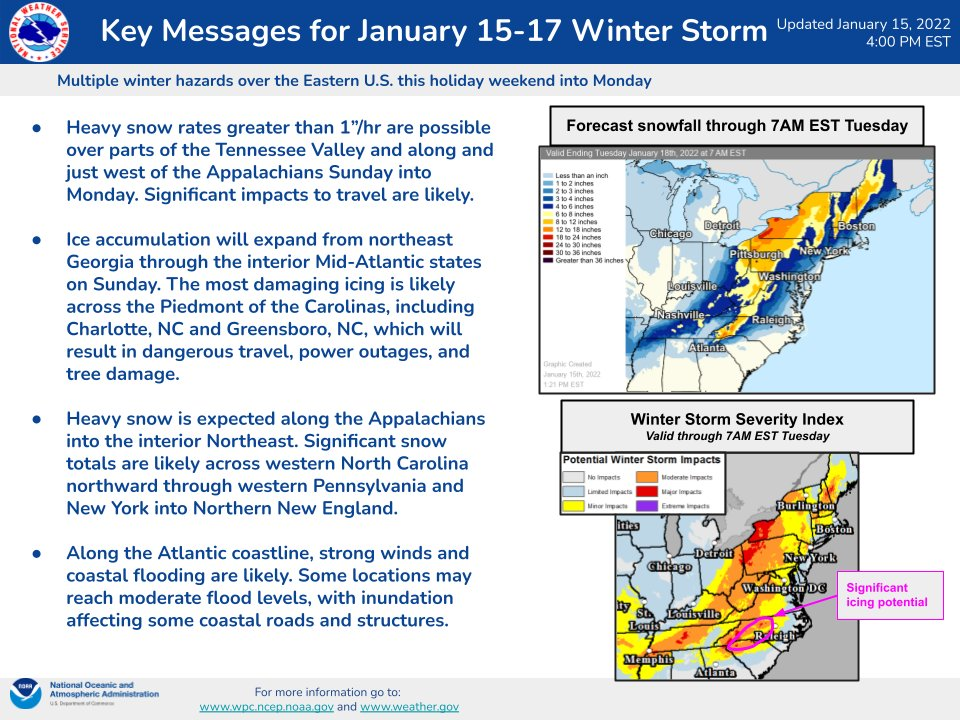 "The most significant icing is expected over the Carolinas this morning. Significant impacts to travel across these regions are expected," the NWS said.

Snowfall rates could top one inch per hour from northeast Georgia into the western Carolinas and far eastern Tennessee, the Storm Prediction Center stated. Heavy snow is also possible in western Virginia. The governors of Georgia, North Carolina, South Carolina and Virginia declared states of emergency, allowing resources to be positioned ahead of the storm's arrival.

Parts of northern and central Georgia could also see powerful winds Sunday, the National Weather Service in Atlanta said. "With strong winds and the potential for winter weather, we are highly concerned about downed trees and powerlines knocking out power through Sunday, so prepare now!" the service wrote on Twitter Saturday evening.

Georgia Gov. Brian Kemp ordered the state Department of Defense to prepare 1,000 National Guard troops to assist in the response to the storm.