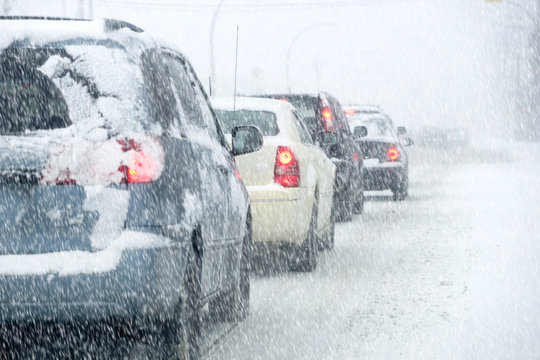 A strong winter storm is unleashing ice, snow and freezing temperatures across the South Central U.S., setting record lows in multiple states and leaving millions of without power. As of Monday night, more than 150 million Americans remain under various winter weather advisories as the storm spreads heavy snow and significant ice accumulations from the Southern Plains and Ohio Valley to the Northeast. 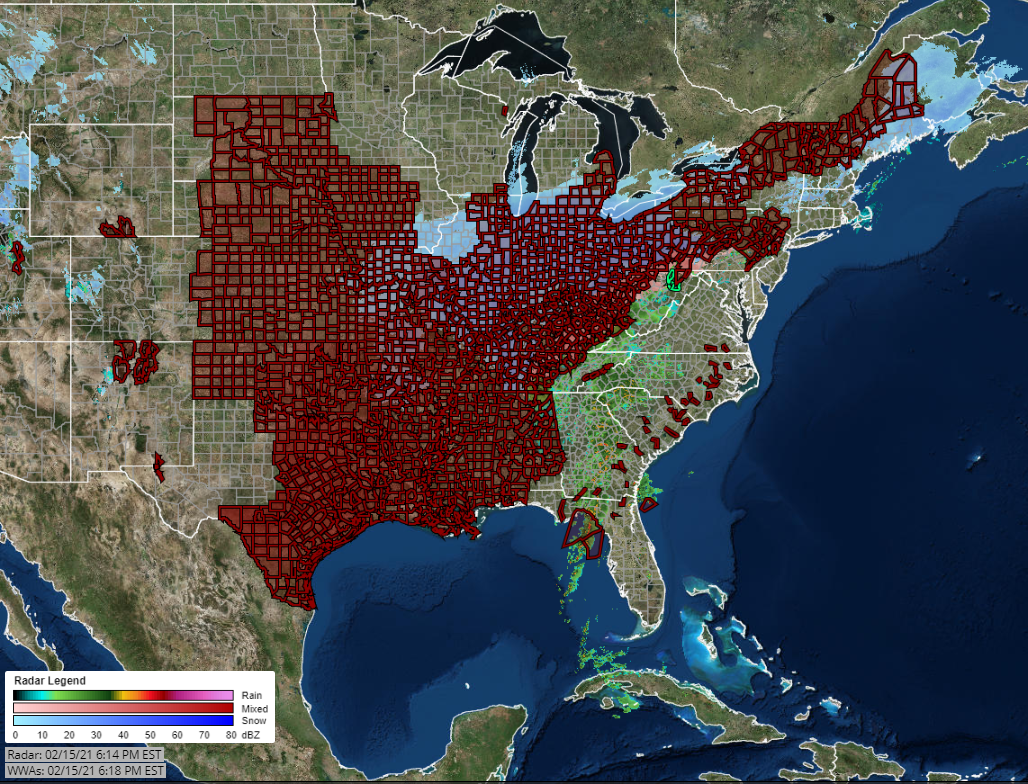 The national weather service explains “This impressive onslaught of wicked wintry weather across much of the Lower 48 is due to the combination of strong Arctic high pressure supplying sub-freezing temperatures and an active storm track escorting waves of precipitation from coast-to-coast," The NWS confirmed that "teeth-chattering" cold temperatures will continue between the Rockies and Appalachians through Tuesday, with lows in the -20s and -10s for the Northern and Central Plains and Upper/Middle Mississippi Valley. The cold air is so widespread that you could travel nearly 2,000 miles from the Rio Grande on the Mexican border to the St. Lawrence River on the Canadian border entirely in winter storm warnings or watches. 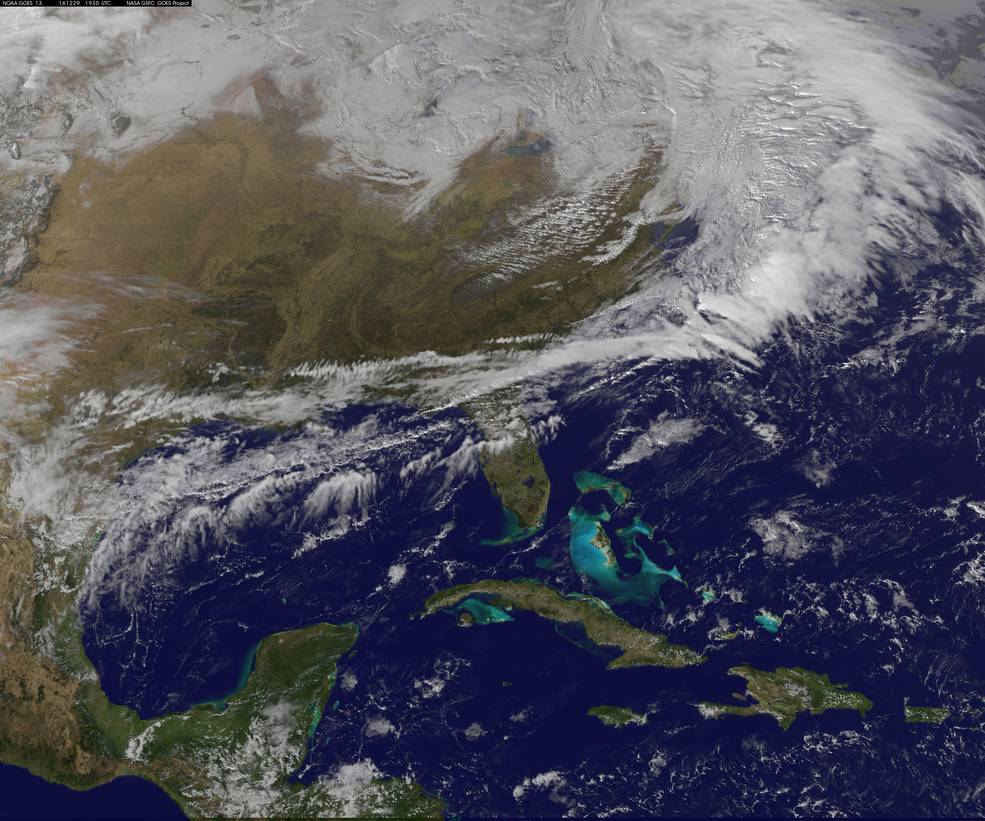 The record low temperatures attributed to the current "cold snap" may rival those of historic cold periods in Feb. 1899 and 1905, according to the NWS Weather Prediction Center. It said early Monday that “record lows had already been established in parts of Minnesota, Nebraska, Iowa, South Dakota, Kansas, Wisconsin, Colorado, Missouri, Texas and Oklahoma, with temperatures likely to drop even more on Tuesday morning.” For instance, Kansas City, Mo., on Monday reported -32° F wind chill, its lowest recorded since 1989, while Sioux Falls, S.D., announced a record low temperature of -26° F. Cities in Texas including Corpus Christi, Dallas, San Antonio and Austin also saw historic record lows. 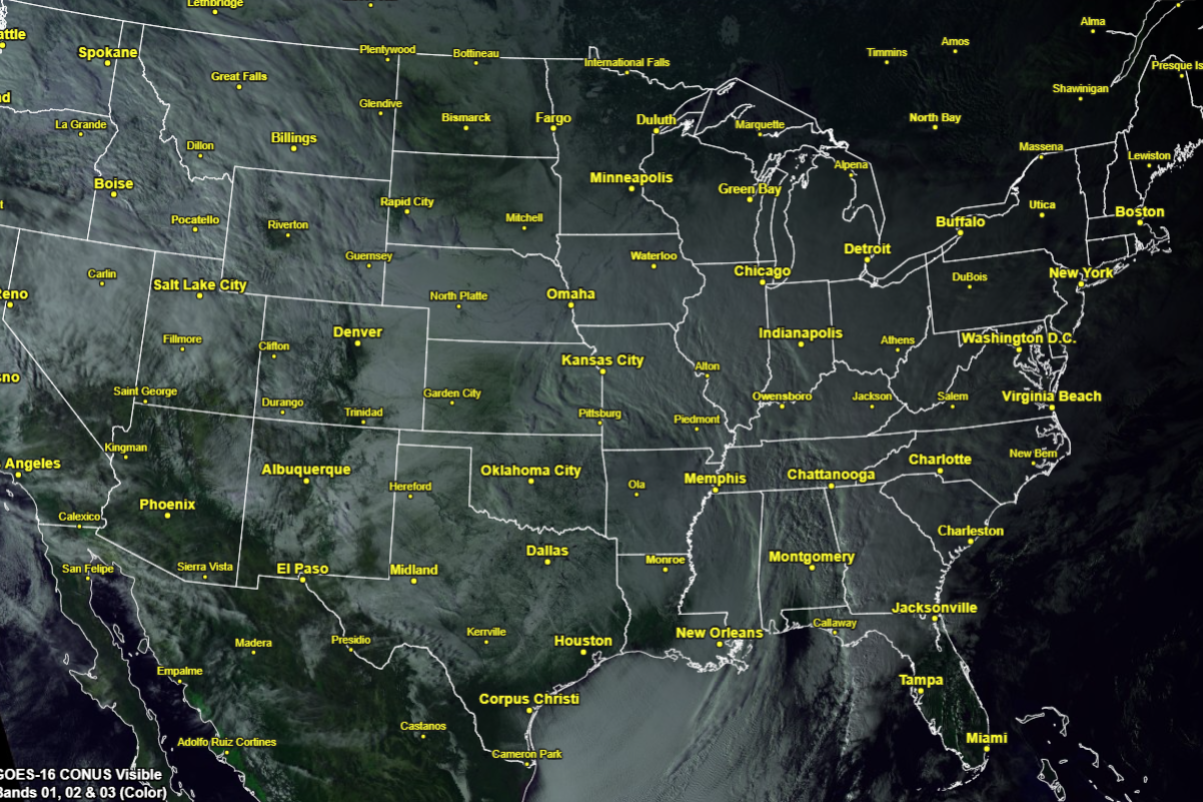 The wintery conditions have resulted in emergency declarations in several states, including Alabama, Oregon, Oklahoma, Kansas, Kentucky and Mississippi. Texas Gov. Greg Abbott issued a disaster declaration in all of the state's 254 counties, and also requested a federal emergency declaration, which President Biden approved on Sunday. The extreme weather has also meant widespread power outages in multiple states, according to online tracker poweroutage.us, which reports that thousands of customers are without electricity in Oregon, Virginia, Louisiana, Arkansas, Mississippi, Kentucky, West Virginia and North Carolina. In Texas alone approximately 2.7 million customers are without power after conditions prompted statewide rolling blackouts. 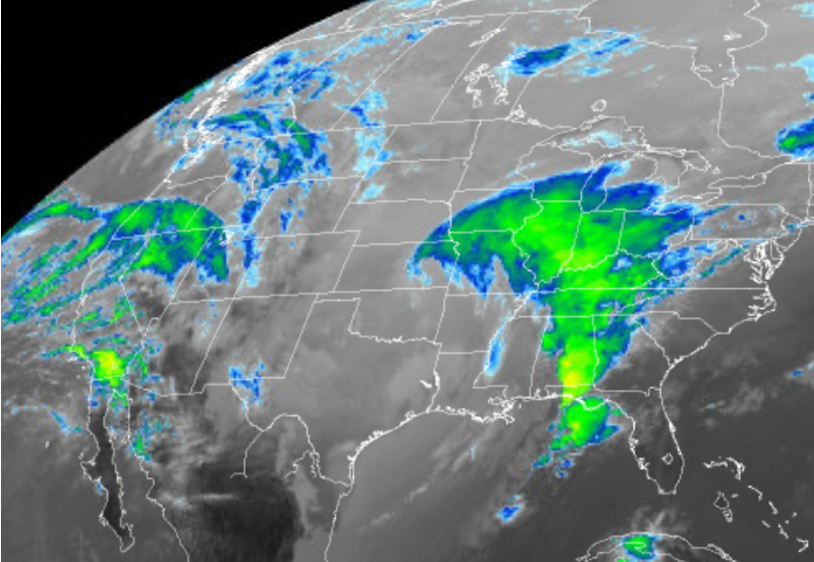 Those who are without power are encouraged to check on their elderly neighbors and heed several safety tips, including using flashlights instead of candles, keeping portable generators outdoors and conserving heat by closing off unused rooms, placing towels or blankets underneath doors and covering windows. Officials in states including Texas and Louisiana are also persuading residents to avoid roads amidst the dangerous driving conditions. Along with blackouts, these powerful winter storms have caused COVID-19 testing and vaccination sites to close due to the weather in multiple states. According to flight aware, thousands of flights within, into and out of the U.S. have been cancelled and delayed.

Forecasters are predicting that areas in the Southern Plains will stop seeing snow and wintry mix late Monday morning, but "treacherous" travel conditions will persist as frigid temperatures will limit the amount of melting. Meanwhile, heavy snow and freezing rain are expected to move northeastward, with 6 to 12 inches of snow forecast from the Ohio Valley and eastern Great Lakes to northern New England. The freezing rain may cause a "plethora of problems" from east Texas to southern New England, with significant ice amounts of a quarter to half an inch likely in some areas. A band of sleet and freezing rain of up to .25 of an inch is forecast to stretch from the western Gulf Coast through the Appalachians and into southern New England, and the agency warns that travel disruptions and power outages are likely to continue.

Monitor the storms with us at weatherTA﻿P.com! No credit card information required at sign-up.